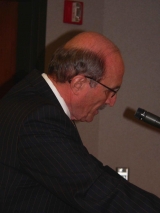 July 8, 2009 (El Cajon)—By a 5-0 vote, Grossmont Union High School District trustees approved a notice of intent to revoke the charter for Helix High School. Superintendent Bob Collins (photo, left) and the trustees made clear that Helix must change the makeup of its governing board and improve procedures to protect students from child molestation, or face revocation of its charter at a hearing in the next month.

“Four convictions for child molestation in the same high school raises serious concerns,” Collins told trustees, referring to four teachers convicted of having sex with students, as East Count Magazine has previously reported. He assured parents and students present that tonight’s hearing was not about assessing blame or having an anti-charter agenda as some have alleged. (In fact, trustees recently approved a third charter high school, Liberty). Despite strong student academic achievement, however, Helix will likely lose its charter if it fails to meet recommendations made by the GUHSD trustees.

Collins testified that in some of the cases, teachers or staff suspected sexual misconduct but failed to report their concerns. Instead, they confronted the perpetrator, potentially placing students at even greater risk. “If you have a reasonable suspicion that a child is in danger, your obligation is to report it to law enforcement and child protective services,” Collins said. “That is from the Attorney General’s guidelines..Teachers, administrators and volunteers didn’t report according to the law. That’s the issue.”
He urged the Helix Charter board to adopt the District’s child abuse reporting policies, provide adequate staff training on proper procedures, replace teachers on the charter board with potential conflicts of interest and add parents who are elected, not appointed by board members.

The GUHSD trustees have been investigating allegations against Helix for approximately two years. “This board was very concerned about some very misleading statements,” Collins said, noting that the GUHSD trustees were told that one administrator accused of sexual harassment had left voluntarily due to a “socially awkward incident.” Collins observed, “Sexual harassment is a very serious incident.”

Trustees want Helix to adopt policies prohibiting teachers from giving rides to students or having students in teachers’ homes without parental permission, or from being alone in a schoolroom with a student behind closed doors. “Our policies need to protect both our students and our teachers,” Collins emphasized, adding that damage done to students subjected to sexual abuse is “horrific.” He cited a recent court case in which a $1.25 million judgment was awarded against a school for sexual abuse of a student.

Trustee Priscilla Schreiber said she has been a strong supporter of the Helix charter “more than anybody on this board” but added, “There has to be somebody in charger over there putting some serious guidelines and oversight into place.”

Jim Kelly, another trustee, denied rumors that the board has its mind made up and assured that the Superintendent is “a man of good faith.”

Chairman Robert Shield noted that a resolution has previously been introduced which would “make this go away” but that was rejected by Helix, specifically, setting up parent-provided oversight of the charter board. He warned, “If we don’t resolve this in the next three or four weeks, then we can’t resolve it.”

Numerous Helix students, parents, teachers and staffers turned out in support of the Helix board. 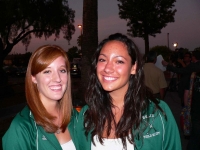 “It’s very frustrating because none of us wants the charter revoked,” said Alexis Aceves, a recent graduate of Helix (photo, right, with Aubrey Asimos). Her father, a police officer, has served as a community member on the charter board. “I got a fantastic education. I was on ASB (Associated Student Body) when it all happened and it was shocking, but it did not affect my education.  The teachers and staff on the board right now are totally there to represent the students." 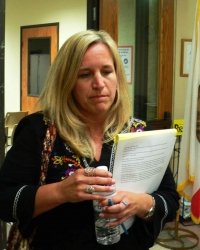 Julie Damschen (photo, left) is a psychology teacher and member of the Helix charter board. She found the trustees’ decision surprising and troubling. “Originally they told us they wanted a majority of community members and parents on the board. Then they told us the wanted it 9-0,” she said. “Later I believe they were discussing 3 staff members, 3 parents and 3 community members, but as of tonight it’s still unclear what they want.” Asked how the makeup of the Helix charter board compares to other charter schools, she replied, “Ours is not unusual.”

Former GUHSD board member Larry Urdahl offered this assessment after the meeting. “The big problem there is with the Helix Board. They’re not following the rules,” he told East County Magazine. “If you’re a school board member, you have to take Brown Act Classes and more. But the Charter board members don’t do that; to go to a CSBA event costs around $500 a member and that’s a lot of money for them.” The solution, Urdahl believes, is “a new board, or a board that follows the rules.”

Some at Helix have spread rumors accusing GUHSD trustees of wanting to break the charter in order to bring Helix back under district control for financial reasons given the state budget crunch—an accusation denied by trustees.

“We are a very diverse board,” trustee Gary Woods observed, “and when this board unites on something, it’s serious.”

Collins summed up the sentiments of others in assuring that revoking the charter is not the goal (though it appeared evident that revocation will likely take place if Helix refuses to comply with the district’s requirements). So at recommendation of staff, he asked the board to vote for the notice of intent to revoke the charter. Collins, who has extensive experience overseeing sexual misconduct cases as Superintendent of schools in Los Angeles, made clear that his goal is to “assure the safety of kids.”
The Superintendent concluded “Resolution of this lies squarely at the feet of the Helix Board members.”