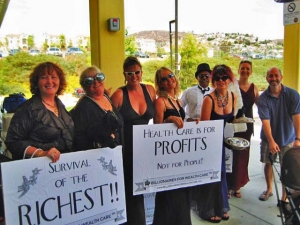 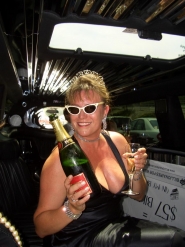 approximately 1,500 turned out to cheer on and heckle Congresswoman Susan Davis (D-San Diego) during a town hall meeting in Spring Valley Saturday afternoon. Protests from conservative “teabaggers” and signs with racist overtones were countered by a newly-formed group calling itself “Billionaires for Wealthcare.” (photos)

Dressed in formal attire, members pulled up in a limousine to greet other protesters, thanking them for “standing with billionaires” to oppose real healthcare reform. The group later posted a YouTube slideshow, followed by a humorous video inside the townhall meeting,  then forwarded an e-mail that read "Townhall crashed by wealthy Hollywood elite," creating an online sensation.

Inspired by the website www.billionairesforwealthcare.com , Barbara Cummings of Spring Valley was among those to don black attire and pearls for the occasion “because sometimes street theater can have an impact where just yelling at one another accomplishes nothing,” Cummings said. 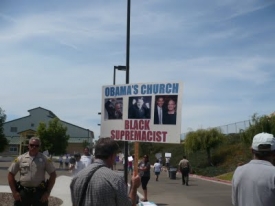 Davis staffers passed out information on healthcare reform including answers to common questions—answers many in the crowd apparently had no inclination to read. Although the majority of the crowd seemed in favor of healthcare reform, those opposed were not content to wait their turn to be called upon to ask questions. Instead, many shouted out insults to the Congresswoman and some uttered racial slurs including "nigger" against President Barack Obama. 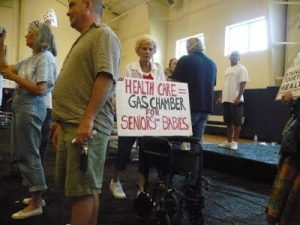 When Davis attempted to assure the crowd that Congress does not plan to take anybody’s healthcare away (instead considering a public option for those who have no insurance or are dissatisfied with their coverage), booing ensued.

One protestor (photo, right) carried a sign reading "Healthcare=gas chamber for seniors and babies," an apparent reference to claims that the bill's provision offering coverage for end-of-life care and counseling would encourage euthanasia.  The American Association of Retired Persons (AARP) has issued a statement denouncing that claim as false.

One UCSD student, dismayed that anti-healthcare protesters prevented her from asking a serious healthcare question (regarding coverage for women’s reproductive health) posted her account of the town hall meeting here: http://bitchingblogbites.blotspot.com/2009/08/chaos-at-town-hall.html.
Disruptive tactics by anti-healthcare reform protestors appear to be counterproductive. A new national poll conducted by the American Association of Retired Persons has found that 80% of those surveyed now support a public option. 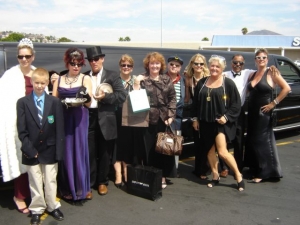 Street theater tactics by Billionaires For Wealthcare may be contributing to the pro-healthcare reform sentiments. At its website, the group declares itself to be interested in one thing: “Profit!” A message at the site warns “fellow billionaires” that times are perilous because “the new government in Washington is trying to put an end to our decades-long profiting spree in health care.”

The group’s site includes a mock list of demands that includes saying no to ANY health care reforms, privatizing Medicare (“What do old people need money for anyway?”) and abolishing the FDA. (“We will self-regulate. Trust us…again.” 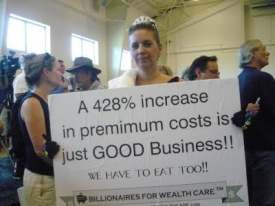 Davis supports the Obama healthcare proposal, H.R. 2100, which she believes is necessary to control skyrocketing health care costs while extending access to healthcare for the 47 million uninsured Americans. 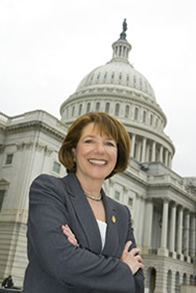 Premiums for health insurance have doubled for individuals and families since 2000, Davis’ website notes “ Further, without action, Medicare will become insolvent during the next decade,” she warns.

Davis (photo, right) cast a vote in Committee approving H.R. 3200 because it will provide access to those without coverage and will work to reduce health care costs. However, she remains concerned about some of the provisions including impact of proposed reductions to Medicare and Medicaid funding on California’s hospitals. She is also concerned that small business will face difficulties providing health coverage to employees. Davis has pledged to advocate for these issues in the bill to be resolved before the legislation reaches the House floor for a vote.

Davis, whose father was a pediatrician, also offered key amendments to strengthen the legislation, including requirements that states participate in developing the nation’s health coverage requirements and guidelines. To prevent the unemployed from losing their insurance before the legislation takes effect, she also added provisions to extend eligibility for “COBRA” benefits beyond the current 18-month eligibility period. In addition, she voted against several attempts to weaken or derail the legislation, including amendments to completely remove the “public” health insurance option.

All employees who are not insured whether rich or of the middle class should be educated about the importance of having health care insurances which will benefit them at the end or if in case an accident may occur. Establishing an organization that's composed of billionaires should not forget the basic reason why it was established which is to help not only themselves but also the less fortunate ones.

Who are the 47 million people without medical insurance? Why are we making provisions for illegal immigrants? why must we always have to apologize if we make more money than some people? Why does the government not have the same medical plans that we have and why do we pay them so much when they retire? I think it is sad that many people feel that those who oppose Obama and his merry band of Czars are racist, I am not a racist and I am insulted to be labeled as one. That is a cheap tactic that is used when they know the heat is being turned up on them. Let us be adults, stop the whining and start using the the our heads and find a solution. Republican or Democrat it does not matter, what matters is we come together, admit if we made a mistake and do something that will really benefit this wonderful country we live in. If we want immigrants then we must make them citizens, they need to speak the language and contribute to our country, they need to follow our laws and they need to repect our country. I believe giving handouts to so many as enabled their own poverty, you want to eat, you work, you want to have nice cars and nice homes, you work, if you do not work and you do not pay taxes you go back to your own country. Enough of hand-outs, and changing our language on products so it is easy for them, learn the language,if they are so unhappy with their own country then they should be happy to learn our way.

I had never heard of this group and I appreciate the links. This is a very clever form of "protest," and is just what is needed right now, as opposed taking loaded guns to townhalls for no particular reason. We do need serious debate about this issue, and there are legitimate concerns about this program. Although I fully support the plan advanced by Obama I am open to listening to other points of view and even to modifying my own. But the vitriol, hatred and not so veiled threats and racism are very sad and counter productive. Intelligent opponents would not try to advance an argument with such ignorant tactics. Bravo to the "billionaire" protesters for making a serious point in a very light hearted way. Just what we needed right now!

As one of the Billionaires I want to thank Miriam for her timely reporting in East County Magazine.
In my experience at Davis' town hall forum on healthcare, the clear majority (2/3) were well behaved civil very concerned American citizens who recognize that the for profit health care system in America today is a disaster and needs fixing, and they were their in support of some type of reform.

All the anti reformers were rather crazed and irrational and disrespectful even downright belligerent and featured such signs and slogans as Obama as hitler complete with hitler moustache, and those happy with throwing themselves on the tender mercies of the for profit greed inspired expensive existing health care disaster we currently enjoy.

Come on people, think, we can bail out financiers who rig the US and world economy to the hidden tune of multi tens of trillions of US citizens dollars; we can blow 3 trillion dollars on an immoral and illegal invasion of Iraq, but we can't utilize the economies of scale and virtue of non profit administration of an advanced health care system for the people of the richest nation (still) on earth.

It's very hard being a billionaire, all the traveling, climbing in and out of stretch limos, private jets, well you can only imagine. In the hamlet of Srping Valley we struck pay dirt! Raggedy people with rotten teeth and bad breath, begging us to keep the status quo and continue to deny them universal healthcare! Then there were the uber patriots dressed all in their red white and blue wanting to deport Obama back to the COUNTRY, Hawaii, where he was born. My little tummy still hurts from laughing at them. TaTa

I mean, making millions of dollars in salary and billions from back dated stock options is just not enough to get by on these days. There's the cost of private schools, the expense of gowns for lavish parties, even lobster has gone up in price. Just to take our yacht out for a spin cost $40,000 in fuel alone. So, if a few old people can't get hip replacements, or your radiation treatment for breast cancer is denied, just remeber, that money that would have gone for medical treatment, is going to pay for my next gown.

Literally. That's what this is all about, after all; mean white people who cannot stand that a black man is more successful than they are: President of the United States. And smarter, and nicer, and better looking. Get over it, you bigots. You lost.