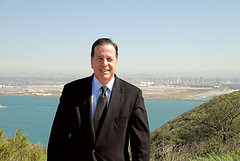 Q:  What compelled you to file a  lawsuit against
SDG&E over
the recent wildfires that devastated East County and San Diego?

A:  We’ve brought a lawsuit against SDG&E for two reasons.  One,
because our investigation to our satisfaction, and to anyone’s satisfaction
that would look at it objectively, found that SDG&E failed to maintain
its power lines in a safe condition – and that caused the fires.  We
were pleased to see that was confirmed by Cal-Fire.

Q:  What do you hope to accomplish through the lawsuit?

A:  We are hoping to recover about $45 million from SDG&E…The
second part is by holding them accountable, they will take action now to do
the brush management and the equipment improvement needed to prevent future
fires [caused by SDG&E power lines].

Q:  What is the status on the lawsuit?

A:  We’ve already had several hearings. The respective parties
are organizing now.  In addition to our case,  there are cases filed
by a number of homeowners.  There are a number of suits, including one
class action. That would apply to homeowners in a similar area, similarly situated.

Q:  Do you anticipate anything happening between now and our
September 1st press deadline related to the fire lawsuit?

A:  Hopefully there won’t be any more fires.

Q:   Are you taking steps to prevent fires from causes other
than power lines?

Q:   Drought is one factor contributing to fires in our area.  Drought
also means our area could face a water shortage.  You’ve called
upon the City Council to adopt a mandatory water conservation program

and
indicated that your office will be taking action on water issues.  Can
you please provide details?

A:  We’ve prepared an ordinance that would implement a conservation
program that’s substantially more ambitious than what we have currently.  We
also have proposed that we implement a water recycling reclamation program.
In addition, we have proposed that the City initiate its own desalinization
plant, and we have also asked that we increase our storage.  So we’ve
been pushing on that.  The City Attorney’s office is deeply involved
in water issues and has been for 75 years because of the legal issues involved.

Q:  What are the biggest water issues facing our area currently?

A:  The water problems we have are with the [U.S.] Environmental Protection
Agency. We discharge about 180 million gallons a day into the ocean and there
is some interest on the part of the EPA that we go through a higher level of
sanitation, higher level of removal, what they call secondary. There is some
discussion of avoiding that by making use of reclamation, which means we would
use the 180 million gallons for water reuse. That’s important because
we are out of water. We are 90% dependent on imported water here.

Q:  What would you say to those critics who have dubbed past water reclamation
proposals “toilet to tap”?

A:  Right now we buy reclaimed water.  A substantial amount of our
drinking water that we buy from Colorado and Sacramento Delta is recycled along
the way.  Also, Orange County has already initiated the largest water
recycling program in the State. Los Angeles is now committed.  San Diego
is the only major city in Southern California that is not committed.

A:  What could be behind that is the idea that there are private interests
that would like to monopolize water and get control over water, and by public
recycling of water, that would make monopolization more different.

Q:  What companies might stand to profit from controlling our
water?

A:  The Poseidon Company.  They have a desalinization plant in Carlsbad
in the works.

Q:  This would be a decision of the San Diego City  Council.
Has Poseidon made any large donations to Council candidates?

A:   Poseidon has made very aggressive campaign contributions, but
I wouldn’t want to get into that.  The City of San Diego has been
very deeply involved in water decisions for many decades. We actually provide
water beyond just the City of San Diego.  We provide it outside the City
as well. We are the largest water provider in the County.

Q:  What’s the next step toward implementing your recommendations?

A:  Right now the next step is there has been a pilot program ordered
by the Council and we are hoping to break that lose. The Mayor has been holding
that up and we’re hoping he will let that go forward….Donna Frye
is looking at that and she would like to take action as quickly as possible.  She
has the Natural Resources Committee.

Q:  How would costs of a desalinization program be funded in
these tough economic times?

A:  We don’t really have a choice.  We are 90% dependent on
imported water.  Of course we would need a public hearing and ratepayers
would have the opportunity to object.

Q:  So costs would be passed on to ratepayers?

A:  That’s the only way it’s going to be done, but we think
it’s more of an investment. If we do that, it will make us less dependent
on imported water and eventually it will bring down the cost of water.

Q:  You’ve just published
a report faulting SDG&E for failing
to comply with state laws requiring production of electricity from non-fossil
fuels, and your office has threatened to sue SDG&E on this issue, too.
What’s the latest on that?

A:  SDG&E is not living up to its obligations to have 20% of its
energy based upon renewable resources.  There are two moves. We’ve
put them on notice and so far they have not really responded positively, so
there are two options.  One is to proceed in some way with legal proceedings
in court or before the PUC [California Public Utilities Commission].  The
other is for the City of San Diego itself to go out and request that there
be proposals brought forward to provide alternative sources of energy directly
through the City into the grid; that is, we would contract ourselves directly
with renewable resources and that would go into the grid because SD&E is
also in violation of the franchise agreement with the City. We issued our Interim
Report in July.  We always like to lay out where we are headed.

Q:  Your report suggests you don’t believe Sunrise Power Link is
the right choice for SDG&E to provide power from renewable resources.

A:   Power Link would create as many problems as it would solve.  It
would require a lot of energy use that would require carbon discharging, and
it would offset whatever renewable energy it would provide. We think that they
[SDG&E] are holding the whole renewable energy hostage to the Power Link.  That
is a device that would bring not just renewable energy over, but other fossil
fuels over including energy which would be generated by Liquid Natural gas…Instead
of going into renewables, SDG&E is attempting to get Cities and ratepayers
even more dependent on [fuels] from a foreign country.

A:  No, they are getting their liquefied natural gas (LNG) from Indonesia.  Not
only would we have to get LNG from Indonesia, but we’d have to transport
it through tankers over here, have it unloaded and converted in Ensenada, Mexico,
then transferred up here. SDG&E is in complete control over that--or we
could do solar power.

For updates on these and other actions, visit the City Attorney’s
website.