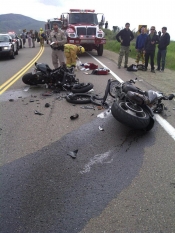 “Unfortunately, one patient was pronounced dead at the scene,” said Nick Schuler with Cal Fire. “The second patient who suffered arm and leg fractures was flown to Sharp Memorial Trauma Center by Mercy Air.”

CAL FIRE was assisted by the Chula Vista Fire Department Engines 56 and 58malong with AMR medic units 412 and 420. Otay Lakes Road was shut down to traffic in both directions while the rescue and subsequent investigation was in progress.

ECM News partner 10 News reports that a 22-year-old rider attempted to pass a group of motorcyclists when he struck another rider head-on. CPR was performed, but paramedics were unable to revive the fatally injured driver.