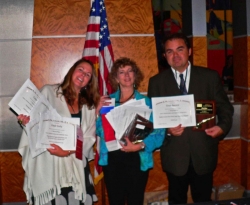 As an online magazine that’s swiftly vaulted from monthly to weekly to now daily new publication, ECM had a choice of categories in which we could qualify. Believing that our writers’ works were strong enough to compete head-to-head against the top newspapers in town, ECM entered their articles in the daily newspapers and websites category – and won or placed in nearly every category we entered. Two ECM writers also won in the magazine category. Our team picked up awards for breaking and general news coverage, investigative reporting, consumer/public interest reporting, as well as political'government, travel, multi-cultural, opinion, and column writing.  In addition, ECM received an award in the "wild card" category (regional economic crisis) for our coverage of how budget cuts impact local fire agencies. Winning topics also included wind turbine projects, solar farms, water rate hikes, wildfire protection, hunger in East County, early voting lines, Old Highway 80, and cultural celebrations at a new Native American museum.

“Congratulations to our talented team of journalists and to our webmaster, our hard-working webmaster, business manager, volunteers and interns who have helped make our publication a success,” said editor Miriam Raftery. ““We are deeply honored by San Diego Press Club’s recognition and aspire to expand our award-winning team to provide coverage in every community east of I-15. We also extend our heartfelt thanks to our publisher, the nonprofit Heartland Foundation, and our founding grantor, Foundation for Change, for believing in our business model and helping our vision to become a reality  In addition, we thank our many donors and sponsors, especially Viejas, sponsor of our wildfire alert system, for helping us attain more than a million hits to our site each month."

Leon Thompson, general manager, expressed appreciation to the many supporters of East County Magazine. “What makes ECM stand out is our talented writers providing fresh, original reporting on stories of interest to East County residents. We are essentially of a small town newspaper in a high-tech package,” he said, noting that editor Miriam Raftery has been writing about East County for twenty-five years and has in-depth knowledge of the region.

He added, “As a not-for-profit, non-partisan community news magazine we depend on the community we serve for support. “That is why we are so grateful for the support of individuals and local, indigenous businesses. We are especially grateful to Viejas, for sponsoring our e-mail wildfire alert service and enabling us to expand our distribution of this life-saving free service as well as our news coverage of wildfire preparedness and other important issues.”

Thompson added, “Do you remember when we all paid the newspaper boy five bucks every month for a rolled up newspaper tossed into our driveway? That five dollars, along with advertisers, financed fresh, timely original reporting. If all of our readers pledged a similar amount, just imagine how much more East County Magazine could accomplish. Obviously our readers want more reporting on topics too often ignored by media outside East County. By supporting our nonprofit media in this way, we can be assured of news served up independently, free of outside influences, and beholden to no one but our readers.”

"With support from our readers in the community, we hope to cover even more important East County issues in the future," Raftery concluded.

Winning writers, categories and articles from East County Magazine include:


We also congratulate Jamie Reno, who was honored with the Drew Silvern Award for Special Achievement in Reporting for his courageous coverage of cancer. A cancer survivor, he recounted his own struggle with the disease and profiled 50 fellow lymphoma cancer survives including celebrities in his book, Hope Begins in the Dark: 50 Lymphoma Survivors Tell Their Exclusive Life Stories. His newest book, Snowman on the Pitcher’s Mound, is a life-affirming story of a Little League player coping with his mother’s cancer diagnosis.

2nd place, Series, Don Quixote Fights Windmills & So Do the Folks in Boulevard. (Part 1, part 2, and part 3) Judge’s comment. “With a cast of hundreds, sources from all over the country and an issue that can’t go away, Early did an excellent job of covering all sides.”

I am wondering how I may be notified whenever a new post has been made. vocal health