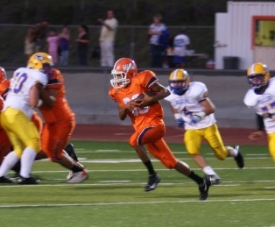 The term refers to Sisyphus, a character from Greek mythology, who was sentenced to an eternity of rolling a large rock up a steep hill. Although Sisyphus was always able to move the rock part of the way up the hill, the rock always found a way to roll back to the bottom.

In similar fashion, Grossmont was able to move the ball against the Valhalla defense. The most notable performance came in the passing game as quarterback Tyler Mutter frequently connected with his favorite target, Brett Etherton, who had six catches for 97 yards and one touchdown.

It looked even better for the Foothillers as they limited the Norsemen offense to a field goal on their opening drive. Valhalla went on an 11 play drive that eventually stalled, ending with a 24 yard field goal by Pete Thomas to make the score 3-0.

Unfortunately for the Foothillers, the proverbial rock rolled downhill when four of their drives resulted in interceptions. In a display of ruthless efficiency, the Norsemen scored all four of their touchdowns from these turnovers.

Hansell Wilson had two of the four Valhalla interceptions. "I just stayed back there and just read the quarterback," said the defensive back about his first pick. Brandon Steed and Kweishi Brown had the other two interceptions for the Norsemen.

The first interception of the game by Steed set up Valhalla's first touchdown. Traivonne Brown cut loose on a 32-yard run to extend the Norsemen lead to 10-0 in the first quarter.

Both Wilson and Thomas credited a hard week of practice as a major factor in rebounding from a disappointing 28-16 loss last week to Our Lady of Good Counsel, one of the top high school programs in Maryland.

"We played one of the top programs in the country last week so it kind of helps us when we get into league, but we had a real good week of practice and coach had us prepared both on offense and defense," explained Thomas about Friday's win.

Just as Etherton was an impressive receiver for Grossmont, Jevon Hasten was impressive for Valhalla with eight catches for 118 yards and one touchdown.

This could be bad news for future Valhalla opponents, and it only gets worse: Hasten is only a sophomore, and has almost three seasons left to give defensive coordinators insomnia. Both he and Nino Mallory caught touchdown passes from Thomas and Valhalla led 24-0 at halftime.

The Norsemen extended their lead to 27-0 when a 14 play drive stalled, resulting in a 28-yard field goal by Thomas. It was eerily similar to the first drive of the game for Valhalla, which also ended in a field goal. The Foothiller defense did a respectable job when Thomas was not given a short field to work with.

Also similar to the first half was yet another Grossmont drive ending with a turnover when Wilson just missed returning another interception for a touchdown, "I had great blocks from my linebackers, and then I thought I had it all the way, but then a shoelace tackle at the end." The play set up a six-yard run by Thomas to make the score 34-0.

The aforementioned touchdown catch by Etherton came in the 4th quarter on a six-yard pass from Mutter to make the score 34-7. Etherton jumped up for the ball to make the difficult catch and spoil Valhalla's bid for a shutout.

Both teams are now 1-1 for the season. Grossmont returns home to face Castle Park while Valhalla stays home to take on Montgomery.

The next Game of the Week is the Helix Highlanders against the 2008 state champion Cathedral Catholic Dons. The Scotties are 2-0 with nail-biting wins at Rancho Buena Vista and at home against Mira Mesa.

The Dons, also 2-0, have wins over Steele Canyon and nearby Torrey Pines. This is a great matchup that you won't want to miss! It all happens Friday night at 7:00 at Helix High.

Results from other East County games:

I never heard of this report way back then, but I feel so sad about it as I am a big fan of them. I only wish that I could see this event once again. free live cams