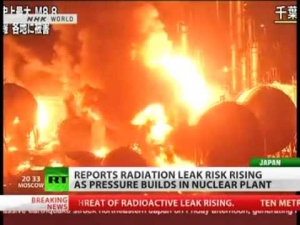 Chief Cabinet Secretary Yukio Edano said, "Now we are talking about levels that can impact human health." But he emphasized that such levels were recorded at the plant and that the "further away you get from the power plant or reactor, the value should go down."

In addition to ordering an evacuation within 20 km of the site, Prime Minister Naoto Kan has now ordered people within 20-30 km to remain indoors to lessen radiation exposure. “There is still a very high risk of more radiation coming out,” he said in a televised address.

“If all workers do in fact leave the plant, the nuclear fuel in all three reactors is likely to melt down, which would lead to wholesale release of radioactive material—by far the largest accident of its kind since the Chernobyl disaster 25 years ago,” the New York Times reports.

“Damage or a rupture may have occurred to the containment vessel,” NHK revealed. Authorities suggest that a suppression pool at the bottom of the reactor vessel has been damaged and that “radioactive material may have seeped out.” Fuel rods were fully exposed for around two and a half hours, authorities reveal, when water evaporated and back up systems to pump water failed.

A fire burning at reactor number four, result of a hydrogen blast, may also be adding radiation to the atmosphere, authorities revealed. Casualties are reported as firefighters battle to keep the blaze from spreading. Moreover, radiation levels are “getting higher,” NHK reported.

Shortly before the third explosion and fire were reported, East County Magazine interviewed Murray Jennex, associate professor at San Diego State University. An expert in crisis response and management and information security, he also has 20 years experience in nuclear including 17 years of testing nuclear containments. As a Naval nuclear propulsion office, he also did a risk assessment of Chernobyl.

“This even is more like a Three Mile Island than a Chernobyl,” he said, noting that Chernobyl’s reactor did not have a core containment structure. “He expressed confidence that the containment structures would hold, adding, “I’ve tested those same types of containment here in the U.S. and that is a U.S. design. That’s why I’m confident that this will hold.”

Still, he found some elements worrisome. “The emergency diesels didn’t work and that is not supposed to happen.” Asked how close the first two reactors that failed came to catastrophe, he replied, “It’s as bad as it gets. Although we can’t say with absolutely certainty that they had partial meltdowns, it certainly seems that they did.”

But later, after learning of the third explosion, workers ordered out of the plant due to radiation, Jenner changed his assessment. He said the radiation leak could be coming from a broken pipe or valve, not necessarily a breached containment vessel around the core. But he added, “That starts to worry me that they can’t get into fix it.” He added that workers may have been pulled out temporarily to minimize exposure while a plan is formulated.

Upon hearing that a fire at the fourth reactor has reportedly burned down the building around the reactor itself, he acknowledged, “That’s getting severe. I guess I shouldn’t say that there won’t be any real danger.”

Asked whether Americans or others in Japan should be evacuating beyond the 20 km ordered by the Japanese government, he replied, “I wouldn’t be within 50 Km right now; I would be making sure that I’m that far away. If I was not a Japanese national I’d probably be making plans to leave.”

The SDSU nuclear expert said he just received a call from Reuters News in Tokyo. “They’re actually starting to think about evacuating themselves as a company,” he revealed.

What is the worst-case scenario he foresees? Even with a full core meltdown, Jennex observed, he does not foresee danger outside of Japan. That’s because Japan’s nuclear facilities are not graphite-monitored; graphite was the substance used at Chernobyl that burned, spreading radiation for a thousand miles or more across Europe. At Fukushima, by contrast, “a worse case scenario would probably make the site itself uninhabitable for a couple of kilometers, but I still don’t think a huge plume will come out of this,” he said.

Monitoring the types of particles being emitted is crucial, he noted. “If you see Plutononium off unit 3, then they’ve got a very bad problem because plutonium has a half life of thousands of years. It will never go away in our lifetime.”

While much media focus has been on the potential for a core meltdown. Partial meltdowns have likely occurred, experts agree, though if the containment vessel around each core has not been damaged, a worse-case scenario of a mass poisoning similar to Chernobyl is widely considered unlikely among nuclear experts.

Newsweek’s Science columnist raises a similar concern, asking, “Could the spent nuclear fuel sitting in a nearby storage pool pose an even bigger threat to people and the environment?... At the 40-year-old Fukushima plant, which was built by General Electric, the fuel rods are stored at a pool about three stories up, next to the reactor (a schematic is here). Satellite photos raise concerns that the roof of the building housing the pool has been blown off, says Robert Alvarez, a senior scholar at the Institute for Policy Studies and a senior policy adviser to the secretary of energy and deputy assistant secretary for national security and the environment from 1993 to 1999. He and other experts are now warning that any release of radioactivity from the spent-fuel pool could make the releases from the reactors themselves pale in comparison.”

The 40-feet-deep spent-fuel poolsare, made of four- to five-foot-thick reinforced concrete lined with stainless steel. But the quake and tsunami swamped backup generators, which failed. When battery-powered cooling failed, hydrogen in two of the units exploded, damaging the reactor buildings—and, spent-fuel area pools as well, Newsweek revealed.

The pools “contain very large concentrations of radioactivity, can catch fire, and are in much more vulnerable buildings,” one nuclear expert told Newsweek.. If the pools lose their inflow of circulating cooling water, the water in the pools will evaporate. If the level of water drops to five or six feet above the spent fuel, Alvarez calculates, the release of radioactivity “could be life-threatening near the reactor building.” Since the total amount of long-lived radioactivity in the pool is at least five times that in the reactor core, a catastrophic release would mean “all bets are off,” he says.

Of particular concern: cesium-137 in the pool, at levels Alvarez estimates at 20 million to 50 million curies. The 1986 Chernobyl accident released about 40 percent of the reactor core’s 6 million curies. In a 1997 report for the Nuclear Regulatory Commission, scientists at Brookhaven National Laboratory estimated that a severe pool fire—made possible by the loss of cooling water—could leave about 188 square miles uninhabitable and cause up to 28,000 cancer deaths.

An economic and energy catastrophe

One thing is certain:  Japan has suffered a severe economic loss. “They lost three reactors,” noted Jennex. “ Those cost over $1 billion apiece, and they lost electrical generation which they now need to recover.” he noted, adding that attempting to cool them with seawater was a desperate last-ditch effort which will result in corrosion and force all of the reactors to be scrapped.

There has been no word on how Japan plans to dispose of seawater used in that cooling process, or whether any potential for environmental contamination from this source could occur.

Neighboring countries on alert for radiation

Japan's NHK TV reports that Russia and South Korea are on "high alert" for possible radiation poisoning, stepping up measurements of air and inspections of all crops coming in from Japan. Inspection of marine products is also expected to be increased as radiation contamination becomes more widespread.

No danger to U.S. residents, most experts say

The likelihood of harmful levels of radiation from damaged nuclear reactors in Japan reaching Hawaii or the U.S. West Coast is low, the chairman of the U.S. Nuclear Regulatory Commission said yesterday, before today’s escalation of the situation. Gregory B. Jaczko, head of the NRC, said the focus for responding to the damaged facilities is on ensuring the reactors can remain cool, Jaczko said, the Wall Street Journal reported.

Jennex agrees that damage will likely be localized within Japan and that West Coast residents or even those in Hawaii are not at risk.  "I still don't think thre will be a huge plume out of this," he said.

But some experts disagree.

“The worst case scenario is that the fuel rods fuse together, the temperatures get so hot that they melt together in a radioactive molten mass that bursts through the containment mechanisms and is exposed to the outside. So they spew radioactivity in the ground, into the air, into the water. Some of the radioactivity could carry in the atmosphere to the West Coast of the United States,” nuclear expert Joe Cirincione told Fox News in a March 11 interview. Cirincione is President of the Ploughshares Fund, a public grant-making foundation focused on nuclear weapons policy and conflict resolution, and served as an informal advisor to the Obama campaign on nuclear issues.

When host Chris Wallace questioned whether radioactivity could travel thousands of miles across the Pacific, Cirincione responded, “Oh, absolutely. Chernobyl, which happened about 25 years ago, the radioactivity spread around the entire northern hemisphere. It depends how many of these cores melt down and how successful they are on containing it once this disaster happens.”

A call to the National Weather Service by ECM revealed that NWS personnel have been ordered not to discuss with media how long any radioactive cloud might take to reach the U.S. , or how quickly it might disperse. All calls were being referred to the Nuclear Regulatory Commission within the U.S. Department of Energy, which has stated it will not provide comment on the hour-by-hour developments in Japan.

California authorities have indicated that radiation levels are being monitored, though there is no need for panic.

Meanwhile Internet sites selling iodine pills report a run on product orders, with at least one website posting that it has sold out. Iodine pills are advised in areas of high radiation exposure to prevent thyroid cancer.

But Jennex concluded, “There’s no reason to be taking iodine right now… “I think people are just trying to make a fast buck.”

It is a terribel things for Japan.Good Luck for them.Oil Press