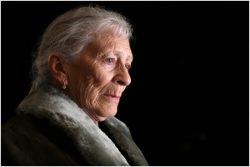 Nancy A. LeaMond, executive vice president of AARP, said the Republican proposal to reduce the deficit “lacks balance and would result in a large cost shift to current and future retirees. The Chairman’s proposal, rather than tackling skyrocketing health care costs, would simply shift these costs onto the backs of people in Medicare,” she warned. “It would undermine Medicare’s promise of secure health coverage—a guarantee that future seniors have contributed to through a lifetime of hard work.”

LeaMond urged Congress to be mindful of the impacts of budget cuts on “real people, not just the numbers.” She added that if Congress is serious about reining in Medicare costs, it should start by allowing Medicare to negotiate for lower drug prices and speeding up access to generic versions of expensive biologic drugs.

The GOP has threatened a government shut-down if their budget demands are not met, pushing for cuts far deeper than those in the President’s proposed budget.

Ryan defends the Republican plan to slash $6 trillion in federal spending including Medicare and Medicaid. The federal government's current fiscal trajectory "is simply not sustainable," he said, adding that Congress has a “moral imperative” to leave our nation’s children debt free.

Yet in addition to cutting programs that benefit seniors, the Republican plan also lowers tax rates for the wealthiest 25% of Americans. The announcement comes on the heels of revelations last week that major corporations including General Electric and Exxon Mobile paid zero income taxes last year despite hundreds of billions of dollars in profits.

A White House statement by President Barack Obama said that "Any plan to reduce our deficit must reflect the American values of fairness and shared sacrifice,” adding, “Congressman Ryan's plan fails this test. It cuts taxes for millionaires and special interests while placing a greater burden on seniors who depend on Medicare or live in nursing homes, families struggling with a child who has serious disabilities, workers who have lost their health care coverage, and students and their families who rely on Pell grants."

According to CNN, "Arguably the most contentious parts of the proposal revolve around changes to Medicare and Medicaid. Medicare, a major contributor to spiraling federal deficits, would be overhauled starting in 2022. The government would no longer directly pay bills for senior citizens in the program. Instead, recipients would choose a plan from a list of private providers, which the federal government would subsidize."

LeaMond said the Chairman’s overhaul proposal to turn Medicaid into block grants could “deny vulnerable seniors and the disabled access to long-term care and force deep cuts in quality and safety in nursing homes, leaving more seniors at risk of elder abuse and neglect. Instead of imperiling seniors’ access to vital services, Congress should work with the states to find smarter ways to save Medicaid money, such as allowing more seniors to receive needed services in their homes and communities.”

The representative from the nation’s largest organization representing senior citizens also called on Congress to reach a bipartisan agreement that any changes to Social Security be focused on ensuring the retirement security of present and future retirees, and not merely to reduce the deficit. “

The Republican plan would also repeal recently enacted protections in the health care law that LeaMond called “a step backward for the needs of older Americans and our nation’s health system,” Other healthcare reforms that would be repealed under the GOP plan include a prohibition on insurance companies denying coverage for pre-existing conditions, health coverage for the uninsured, and allowing parents to keep college-age children on their insurance plans longer.

The AARP represented urged that Congress, in tackling fiscal challenges, should “not upend crucial programs that will come at the cost of seniors’ health and financial security.” She pledged, “We will work with leaders on both sides of the aisle to discuss proposals with the goal of enhancing the health and income security of older Americans and their families.”

It appears lobby outfits like the AARP are quite happy selling my grand kids into slave labor to the Communist Chinese. No one has worked long enough or put enough money into their medicare to pay their own way. Same goes for social Security. These are tax payer funded welfare programs for senior citizens. Someone needs to decide if the countries priority is supporting my generation, 68 years old +, or supporting the future generations. Anyway we are doomed into becoming a 3rd world country with just the current debt load! Our new Republican congress persons are trying to bring in a little reality but the old guard still does not have a clue.

Companies will be barred from instituting caps on coverage when your costs for treatments goes up due to sickness, you can now get insurance with out caps on coverage at "Wise Medical Insurance" search them online.

platform bed plans
There are some companies which do offer insurances to their employees. It is one of the employees' benefits that they could avail from the company that they are working for. It is to secure not only their health but their certain families too. That's why government implements this to the firms for the benefit of everybody.