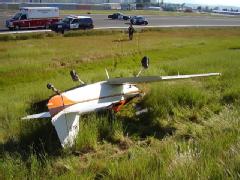 April 10, 2011 (San Diego’s East County) – Two separate accidents in Ramona and Valley Center resulted in damage to aircraft and injury to one pilot.

At 11:50 today, Cal-Fire responded to an aircraft accident at the east end of Lake Wohlford in Valley Center. “The aircraft had a hard landing resulting in the pilot receiving minor injuries,” Battalion chief Nick Schuler reported. The pilot was transported to Palomar Hospital; cause of the accident is under investigation by the FAA.

This morning at 8:30 a.m., an experimental Midget Mustang aircraft at the Ramona airport  flipped over after the plane went off the runway into the mud.  Fortunately, the pilot was not injured, Schuler said.

According to ECM news partner 10 News, the Florida pilot heard a loud noise and realized he had a mechanical problem shortly before landing.  A source close to the scene informed ECM that the pilot experienced brake failure.

Ever since this midget planes are always involve in some accidents. Can we just stop using them to avoid further incident like this one.