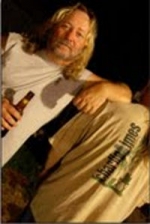 May 26, 2011 (Wynola) – Acclaimed singer-songwriter Charlie Imes will perform on Friday, June 3rd from 6-9 p.m. at the Wynola Pizza Express, 4355 Highway 78 , three miles west of Julian.  Imes’ “On an Island” was a San Diego Music Award nominee in 2009 for Best Americana or Country Album.

“On an Island” blends elements elements of pop, jazz, folk, rock, and as Imes puts it, “a little bossa nova here, some ragtime there.”  Co-produced by Imes and San Diego Music Award-winning artist and producer Jeff Berkeley,  the album includes other celebrated artists such as two-time Grammy winning guitarist Laurence Juber from Paul McCartney’s “Wings” and East County’s own Chris Klich from Grossmont College’s music department.

Imes’ own style has often been likened to Jimmy Buffet. “It’s sunny weather for your ears, and who couldn’t use a little more of that?” Imes has said.

He looks forward to performing at “the beautiful environs of the outdoor stage at the Wynola Pizza Express” which he praised for its “good Italian food, wine, scenery and music.  Trust me,” he added, “if you’re looking for something different, peaceful and thoroughly enjoyable this is a great place to find it.”

There is no cover charge for this event.  For directions, see http://wynolapizzaexpress.com/Maps/index.htm

Its a great pleasure for us and he was the best deserving person in music world.I really impressed form his best givings.Pop and folk there was a good thing to attract anyone.