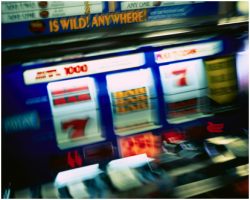 October 18, 2011 (Santa Ysabel) - When someone leaves a casino carrying a large sum of cash, it's typically a jackpot winner. But early Monday morning, a thief  pulled off a heist at the Santa Ysabel Casino, stealing a large amount of money from a secure location.

“For San Diego County, it’s a significant loss. I don’t think we’ve had a loss this large at any other casino,” San Diego Sheriff’s Sergeant Thomas Evans told ECM. Federal and state law enforcement agencies have also been called in on the case.

No suspect has yet been identified in the heist. Surveillance videos are being reviewed, a process which could take several weeks, Sgt. Evans said.“We’re looking at all the angles right now and we’re not ruling out any possibilities.”

The casino is located at 25575 Highway 79 in Sansta Ysabel.  The exact amount of the loss has not been disclosed, however the money stolen likely included a combination of large and small bills, according to Sgt. Evans. “We’d be concerned about anyone suddenly going out and spending a lot of money, buying a new sports car,” he noted.

A child 29 years Las Vegas judge was arrested in December robbery of the Las Vegas Bellagio Casino said he was "devastated and heartbroken" but that "people need to break the law accountable.boston cab