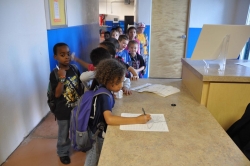 The new $200,000 youth center for children aged six to seven was constructed within the existing BGCEC Clubhouse at 1171 East Madison Avenue, adjacent to Wells Park in El Cajon. Funding for the new facility was provided through sponsorships and donations.

During the grand opening, the kids prepared food as part of the BGCEC’s Junior Chef Program, played Wii fit games in the new media room, created arts and crafts in the refurbished main room, and enjoyed the inviting reading corner. Among the donors thanked were County Supervisor Dianne Jacob, Holly and Rick Terrazas from the office of Congressman Duncan Hunter, the Grossmont Healthcare District, Sarah Ramirez from the City of El Cajon, and Lee Reed.

Construction of the new Little Rascals Rooms at the El Cajon Clubhouse are part of an on-going modernization of the 49-year old clubhouse facility. The Little Rascals Rooms provide a state of the art space for the Club’s youngest members, ages 6 and 7, to learn valuable lessons on health and nutrition through cooking classes and educational films.

“Little rascals develop fine motor skills playing chess and checkers on the kid-sized checkerboard,” said Clubhouse Director Sade Pollard, "and they develop a sense of cooperation and competition playing old-fashioned board games." The Grossmont Healthcare District and BGEC Capital Campaign co-chair Jerry Hollingsworth contributed a total of $200,000 for construction and equipment in the Little Rascals Rooms, which comprises Phase 1 of a three-phase renewal of the old clubhouse facility.

"Physical fitness is important for our youngest members, and we address it in a number of ways," reports Capital Campaign co-chair Priscilla Schreiber. "Adjacent to the Little Rascals Rooms is our gymnasium, where the kids play league sports in basketball and volleyball. Drop-in games such as dodgeball and indoor soccer are all designed to keep their heart rates up and their muscles tight. [And by] using video games such as Wii Fit and Wii Sports in our Little Rascals media center, youngsters have fun while getting a real workout using state of the art of electronic games on the drop-down big screen."

The Boys & Girls Clubs of East County is about halfway toward its fundraising goal of $3.5 million for the El Cajon Capital Campaign. Mr. Hollingsworth reports that the overall scope of the El Cajon Capital Campaign is to rehabilitate the 49-year-old Boys & Girls Clubs and to convert the former Wells Park Center into a Teen Center by the end of 2011. Phase II construction on the Clubhouse begins in December, including an attractive new facade, an expanded learning and homework center called "The Academy," and a remodeled game room and offices.

"Fundraising continues for the new Boys & Girls Clubs Teen Center called 'The Club' which will move into the Wells Park Center in mid-2011," reports Jerry Fazio, Executive Director of the Boys & Girls Clubs of East County Foundation. "The City of El Cajon is our partner in this endeavor. We have secured back-to-back 25-year leases on the old Wells Center," said Fazio.

Two divisions of the El Cajon Police Department are temporarily housed in the center. Next year, they will move in to the new public safety center, whereupon the Boys & Girls Clubs will renovate the center for teens. Amenities will include a fully-equipped fitness room, yoga center, full-service instructional kitchen, and the Academy Learning Center for Teens. Additionally, the Boys & Girls Clubs plan to demolish the vacated shuffleboard court next to the Wells Center, replacing it with a sports court suitable for soccer, volleyball, and roller hockey.

I am sure that in a short while the things will be different in this area.