Trek draws national attention to impact of diet on diabetes 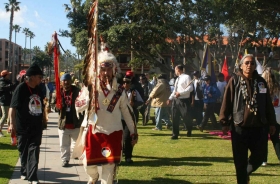 Photos courtesy of the Viejas band of Kumeyaay Indians

February 15, 2011- Members of East County Native American tribes were among hundreds of people who took to the streets of La Jolla Shores yesterday morning to kick-off “Longest Walk III, Reversing Diabetes 2011,” a charitable walk from San Diego to Washington D.C.” 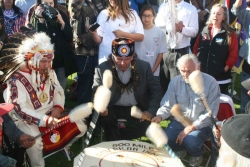 The walk is designed to draw attention to the harmful medical condition that plagues approximately 17% of people in the Native American community, according to the American Diabetes Association.

Brainchild of Dennis Banks, Co-Founder of the American Indian Movement, “The Longest Walk,” urges those in the Native American community to look at their dietary habits. Banks was diagnosed with diabetes but at age 75, was able to dramatically reduce his blood sugar through a diet of raw vegetables and protein soups, without insulin shots. 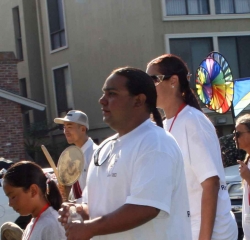 Festivities kicked off Sunday night as participants celebrated a Cultural Day at the Barona Indian Reservation. Monday morning saw the celebration continue at La Jolla Shores, highlighted by a Native American pipe ceremony and a line-up of the tribal nations’ flags.

“We had over 500 people come to the festivities yesterday and today,” said Viejas tribe member Oletha Leo. “It was more than what we had anticipated.” Area tribes represented included Barona, Campo, Pechanga, Quechan Santa Ysabel, Sycuan, and Viejas. Some non-Native Americans also participated.

The long trek east to Washington D.C. will start out with walkers making their way North to their first stop along the long journey at the San Pasqual Reservation. The California section of the walk will conclude on February 23 at Winterhaven. 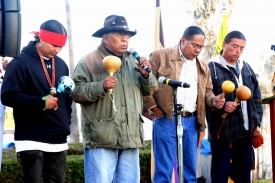 Participants will be passing through many of our nation’s Native American reservations. They are expected to reach the nation’s capital on July 8, 2011.

“People will be joining and leaving the walk at various locations as the walk progresses acros the nation. We expect people to join in Arizona, Texas, etc.,” says Leo.

This event is a very grassroots event aimed at bringing awareness to an epidemic in the Native American community.

Donations will be accepted throughout the length of the walk,. For more information on how to donate, go to http://www.socallw3.com/page7.html.