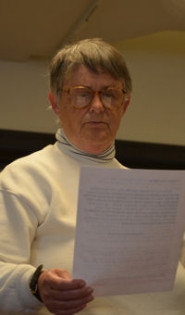 During introductory statements, Frankowiak told the small audience that she was running to save the Republic from the plutocracy that has taken over, as well as the corporate “robber barons.”  A political activist from Julian, she believes it is time to “take money out of politics that has corrupted all” and to “stop passing Patriot acts that are stealing our freedoms.” 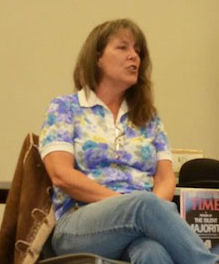 Linnell, a resident of Ramona, said that she is similarly qualified as the incumbent with a Bachelor of Arts degree in business and an Associates in Electronics. She also said that our government has a for sale sign “and we need to take it down.” She promised that she’d introduce an Amendment titled Lobbying with Money is Bribery, adding, “This needs to stop.”
Secor, a retired court employee and fo 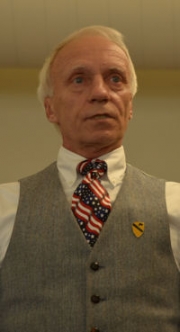 rmer teacher who has also held blue-collar jobs, told the audience that he is the son of a miner and has been an old fashioned Democrat since the Nixon-Kennedy debates. The Crest resident also wore proudly his First Cavalry pin, since he is a combat veteran who served in Vietnam.  Believing there is too much corruption by big money in politics, Secor said he refuses to accept any donation larger than $100 and will take no PAC or union money. 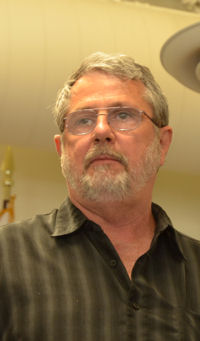 Secor thanked the audience for coming, and pointed out that Hunter was not willing to face his employers—the voters. He promised to do the right thing. He also pointed out that Hunter promised jobs in 2010 and has done nothing to address that, voting against the administration’s jobs bills. Secor also voiced concern over talk of reducing Postal Service, which he sees as a ruse to privatize Postal services. The Post Ofice does not use any taxes and was forced to prefund the retirement fund for 75 years in just five years, he said.  If post offices are closed down it will affect rural areas especially hard, so local Congressmen Hunter’s friends in the private sector can benefit, he suggested.
He also faulted Rep. Hunger for defending the burning of Korans and desecrating of bodies, and even supporting Marine Sergeant Gary Stein who made political statements while in the U.S. Marine Corps. Secor explained that when he was in the Army that was a no-no, and voiced surprise  that Hunter, a former Marine officer, did not know this.
Mrs. Linnell suggested Hunter has shown hypocrisy. She doubts he would defend the “burning of the Bible or the destruction of our flag.” She also emphasized that members of both parties are not representing her, her neighbors, or her family or friend. They line their pockets and run on name recognition.
Frankowiak closed by reading the poem Patriot’s Dream by Arlo Guthrie:
http://www.arlo.net/resources/lyrics/patriots-dream.shtml
In a final analysis, there was quite a bit of agreement among the candidates, but  also substantial disagreement.  All believe, however, that Rep. Hunter  is not serving his constituents.  Each hopes to replace him in November.
With California’s new “top two” primary system, only the top two candidates on the June ballot will advance to the November election.

The most Mother Day Messages convenient Romantic Songs way to keep your Mothers Day presents from getting tossed away would be to take a few moments to consider.