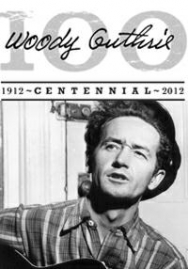 July 13, 2012 (Poway)--Woody Guthrie lived through the most significant events of the twentieth century, forging his talents as a prolific writer who, through his songs, prose and poetry, told the story of everyman.

San Diego County Library joins people around the world in celebrating Guthrie's life and influence. Woody Guthrie's 100th Birthday Celebration will be held at the Poway Library, 13137 Poway Road on Saturday, July 14 at 2 p.m.  San Diego musicians will band together in a free concert to honor the famed singer, who still has a profound impact even 45 years after his death.

Chris Clarke, Dane Terry, Jeff Bertino, and Ross Moore will perform various bluegrass and folk songs in honor of the legendary musician. Other local musicians interested in participating are welcome to attend and join in the performance. Guthrie was born on July 14, 1912 in Oklahoma and left a lasting legacy of bringing voice to the disenfranchised, marginalized, and oppressed.

"Often considered America's greatest folksinger, most Americans know 'This Land is Your Land' but are not familiar with the often tragic life of this incredibly influential songwriter," said Moore.

Woodrow “Woody” Wilson Guthrie was born July 14, 1912 Oklahoma.. His father - a cowboy, land speculator, and politician - taught Woody Western songs, Indian songs, and Scottish folk tunes. His Kansas-born mother, also musically inclined, had a major impact on his career. In his youth,  the tragic death of his older sister, the family's financial ruin, and later the loss of his mother following her institutionalization had devastating impacts on Guthrie’s life.

In 1920, oil was discovered nearby and overnight his hometown transformed into an "oil boom" town, bringing thousands of workers, gamblers and hustlers to the once sleepy farm community. But when the oil ran out, the area’s economy went bust.

Guthrie took to the road, traveling through 48 states, chronicling the human impacts of events from the Dust Bowl to World War II in his wanderings coast to coast. He won many awards for his songs, which continue to touch the hearts of Americans to this day.

Woody Guthrie's 100th Birthday Celebration is part of the library's Acoustic Showcase series, which was recently awarded a National Association of Counties (NACo) Achievement Award for innovation and service to the community. The Acoustic Showcase series is sponsored by the Friends of the Library and the Housing Opportunities Collaborative.

The performance is free.  Please visit www.sdcl.org and sdcls.homestead.com for more information.

The world still needs Woody Guthrie! He stood up for the little man and the working class. He fought for the rights of the common person and helped spread the ideal that this is truly “our land.” I paid tribute to the legendary musician with a portrait of Woody which you can see on my artist’s blog at http://dregstudiosart.blogspot.com/2012/07/woody-guthrie-centennial.html where you can drop by and let me know how Woody’s voice has spoken to you as well.