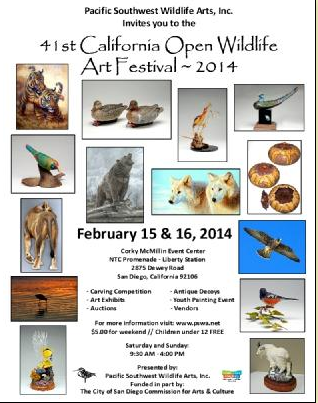 Featuring more than 100 artists, the festival is presented by the Pacific Southwest Wildlife Arts, Inc., a non-profit organization that promotes wildlife art, including traditional hunting decoys, paintings and wildlife and bird photography. The annual exhibition and competition attracts top carvers of wildfowl, fish and birds, as well as wildlife artists and art lovers from all over the United States, Canada, Russia and Japan.

The festival, open to the public, will run from 9:30 a.m. to 4 p.m. on both weekend days at Liberty Station’s Corky McMillin Event Center, NTC Promenade, 2875 Dewey Road, San Diego. Admission is $5 per person, and children under 12 years of age are free. The show is funded in part by the City of San Diego Commission for Arts and Culture. For more information, visit www.PSWA.net.

Wow! what a great festival. I strongly advise everyone to visit