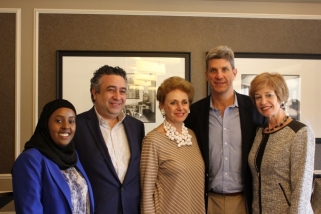 Of the 16,000 Syrian refugees resettled in the U.S. in recent years, not a single one has been tied to terrorism. San Diego has more Syrian refugees than any other U.S. city.

November 22, 2016 (San Diego) – Shadi Martini was manager of a hospital in Aleppo, Syria, when the Assad regime began to prosecute suspects working in opposition. Martini and his coworkers provided undercover aid to the wounded and people suffering.  But in 2012, the secret network was discovered, forcing him to flee the country.

“What I have witnessed is suffering is not limited to my country,” Martini said during a post-election discussion on refugees held last Thursday in San Diego by the Multifaith Alliance for Syrian Refugees and The Partnership for the Advancement of New Americans.

The Multifaith Alliance for Syrian Refugees (MFA) is an interfaith mission to help fundraise for organizations providing direct services to Syrian war victims. As a result of ISIS declaring war on Syria in 2011, the U.S. has resettled about 16,000 Syrian refugees. Since 2014, San Diego has resettled 899 Syrian refugee families—more than any other U.S. city.

Since 9/11, more than 750,000 refugees have resettled in the U.S. While less than 10 were incriminated for terrorist activity, none of them were of Syrian descent. Now Martini tours the U.S. bringing awareness to the crisis, and encouraging public engagement.

Out of 5 million people registered as Syrian refugees, many live in Turkey, Lebanon, Jordan, Iraq and Egypt, according to the United Nations High Commissioner for Refugees (UNHCR).

The MFA is composed of 75 organizations addressing the most impactful fears driving public policy, such as economic impact, terrorism and Islamophobia. With the collaboration of the Joint Distribution Committee (JDC), critical needs of more than 85,000 refugees have been met.

By 2017, UNHCR aims to integrate a minimum of 130,000 Syrian refugees. Constituents can call, or email their local government in support of resettlement and adequate funding for Syrian refugees.

The graduate essay writers are an academic writing website offering professional help in any academic work at affordable prices. First you need to select the topic from the area you are interested. Next collect the information you know about the topic and make it a note. The main topics under science category are humans, Plants and Animals. The structure of the essay can be referred from the online essay writing service. visit here: http://www.bestessaywritingservice.co