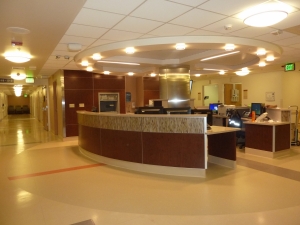 January 6, 2016 (La Mesa) -- Patients are now being treated in state-of-the-art, upgraded rooms on all five floors of the East Tower of Sharp Grossmont Hospital in La Mesa, the Grossmont Healthcare District (GHD) reports.

Over the past three years, taxpayer-funded renovation has been underway on floors two through five of the seven-story East Tower building, originally constructed in 1974. The East Tower work was part of the hospital’s Facilities Master Site Plan. Renovation cost of $41 million was financed through Proposition G, a bond measure sponsored by GHD and approved by East County voters in June 2006.

Each renovated floor of the East Tower has 37 patient beds for a total of 148 beds. Among the improvements: patient-bed utility headwalls were replaced with advanced units; new Americans with Disability Act (ADA) and bariatric accessible rooms were retrofitted; and, nurses are now using newly configured central work stations with upgraded lighting and finishes. Mechanical, electrical and plumbing systems also were modernized with new lighting throughout the floors. Five existing elevators were upgraded with mechanical and cosmetic improvements. Private restrooms also were upgraded. The project included a seismic retrofit of the East Tower, which will bring it into compliance with current California Building Code earthquake standards.

Taxpayer-funded construction is continuing at the publicly-owned, 540-bed hospital which opened in 1955. Prop. G also is currently funding construction of a 71,000-square-foot Heart and Vascular (H&V) Center and 18,000-square-foot Central Energy Plant (CEP). The bond-financed construction began in 2007, and is scheduled to continue over the next several years.

The $60 million three-story H&V Center will eventually expand the hospital’s surgery capabilities with four new cardiac catheterization labs and four multipurpose procedural rooms that can support a wide range of specialties, including general surgery, minimally invasive surgery and image-guided surgery, as well as endovascular interventional procedures. In addition to the building, the current construction phase includes a new loading dock and materials receiving department on the lowest level, a new pharmacy and laboratory on the middle floor and shell space on the top floor for the new surgical floor build-out. Completion of the building is scheduled for mid-2016 while completion of the surgical floor is scheduled for late 2018.

The $47 million, two-story Central Energy Plant will help meet future energy capacity needs of the hospital with new emergency generators, boilers, chillers, cooling towers and auxiliary systems, along with a new cogeneration energy system funded by Sharp HealthCare. The cogeneration system includes a 52-ton, 4.4-megawatt combustion turbine generator manufactured by San Diego-based Solar Turbines. The CEP also will contain a new control room that will monitor heating and refrigeration equipment, medical air and vacuum pumps. The new CEP is expected to save millions of dollars in energy costs, plus reduce the hospital’s emission of greenhouse gas pollutants by 90 percent, GHD officials said. The new CEP was constructed with 131 tons of reinforced steel bars surrounded by 4.23 million pounds of concrete with a 106-by-70-foot concrete foundation slab that is four feet thick. Completion of the CEP is scheduled for early 2016.

The hospital is managed and operated by Sharp HealthCare under a lease agreement between GHD and Sharp HealthCare, which was extended by voters in 2014 for an additional 30 years.

The Grossmont Healthcare District is an East County regional public agency that supports various health-related community programs and services in San Diego’s East County. Formed in 1952 to build and operate Grossmont Hospital, the District is governed by a five-member board of directors, each elected to four-year terms, who represent more than 500,000 people residing within the District’s 750 square miles. For more information about GHD, visit www.grossmonthealthcare.org.

It is very important to modernize the plumbing systems. Plumbing system plays a crucial part in homes and commercial buildings like hospitals and is also the highly used system in every condition and weather. Qualified plumbers like from plumbing service county NJ understand the importance of sound plumbing system and offer integral and unparalleled services to keep the system efficient and working all the time.