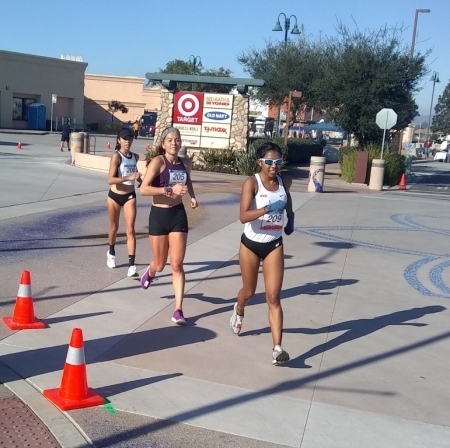 By Mike Allen
January 27, 2020 (Santee) -- Cool fog gave way to stunning sunshine and higher temps Jan. 25, not exactly the best conditions for walkers traversing some 31 miles or 50 kilometers at the 2020 U.S. Olympic Trials in Santee, but glorious viewing conditions for the event.
“This is just fantastic for this city,” said Marlene Best, Santee’s city manager, cheering on the walkers along Town Center Parkway, just below the big clock at Trolley Square. “Only two other cities in the nation have held more Olympic Trials---Eugene, Oregon and Los Angeles.”
Besides the Olympic Trials for the 50K race walk, which Santee previously hosted in 2012 and 2016, it’s also hosted the national championships in the same event for seven years. The city of 58,000 can easily lay claim to being the Race Walking Capitol of the country. 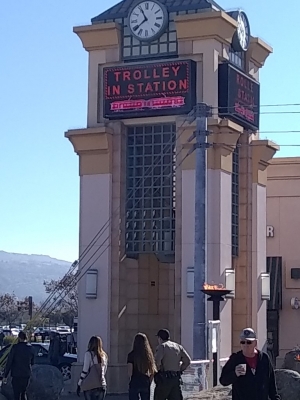 Photo: Olympic torch at Trolley Square clock tower
In race walking, one foot must be in contact with the ground at all times.
Best said race organizer Tracy Sundlun, a Santee resident, along with former City Councilman Jack Dale, helped put together a bid for the event, and the U.S. Track & Field Association approved the city back in 2009.
In conjunction with the competition, the city also hosts a 5 kilometer race/walk, and an Active Lifestyle Expo, which was said to draw about 1,000 people, according to the USTFA press release.
As walkers loped along the 1.25 kilometer course, a few spectators cheered for particular walkers, but the primary sound was the non-stop selection of popular music pumped over speakers, interspersed by announcements of the various competitors’ names and their backgrounds.
About 30 competitors participated in the event. Besides the 50K race, the day included races in 10 and 20 kilometer distances for both men and women, and masters divisions. The walkers hailed from throughout the United States, as well as Canada, Mexico, and Australia. 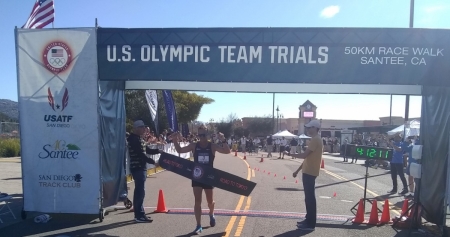 Photo: Andreas Gustafsson, winner of mens 50K race
The premier race, the men's 50K, was won by Andreas Gustafsson, a former Swede who now lives in Coronado, who broke the tape at four hours, 12 minutes and 11 seconds. Gustafsson, 38, became a U.S. citizen by marriage in 2015. He was followed by Matthew Forgues, a resident of Chula Vista, whose time was 4:14:44, and Nick Christie of El Cajon at 4:27:29.
Although all three men are expected to vie for the Olympic team, none of them actually qualified at this race because they didn’t break a pre-set time of 3:50. The make up of the U.S. Olympic 50K race walking team won’t be determined until later using a complex points formula based on past races. The 2020 Olympic Games are being held in Tokyo from July 24 to Aug. 9.
While there is no women’s 50K race walk in the Olympic Games as yet, a lawsuit is challenging that and a ruling is expected soon, according to the USTFA.
The top three winners in the women’s 50K race were Robyn Stevens, 36, of Vacaville, 4:37:33; Erin Taylor Talcott, 41 of New York, 4:47:01; and Katie Burnett, 31 of Washington, 4:53:26.
In the 20K, the winners were Emmanuel Corvera, 1:26:35; Rachel Seaman, 1:36:25; and Amberly Melendez, 1:39:17.
In the 10K invitational race, the top three winners were Andres Gonzalez-Aquino, 47:10; Daniel Soliven, 49:36, and Giovanni Cisneros, 52:08.