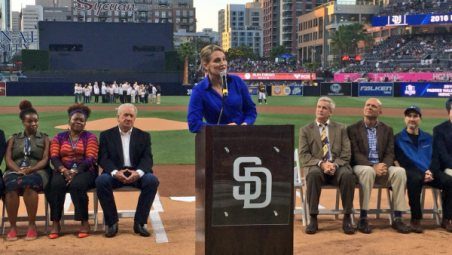 Photo:  San Diego native Ted Williams is entered into the Padres Hall of Fame before the game.  He is honored by his daughter, Claudia Williams.  Courtesy @Padres on Twitter

July 1, 2016 (San Diego) - The Padres started July with an unusual opponent:  the New York Yankees.  The Bronx Bombers, who are generally excellent, have been slumping a bit this season, which could only (hopefully) mean good news for the Padres.  Or could it?  Let’s see if it did.

Nathan Eovaldi was on the mound for New York against Colin Rea for the Padres.  Melvin Upton Jr. got things started in the first with a single that drove home Wil Myers for a 1-0 Padres lead.  Derek Norris launched a two-run homer and the Pads went up 3-0.

The Yanks got a run back in the second with Jacoby Ellsbury’s single that drove home Didi Gregorius and the Yanks trailed the Padres 3-1.

The Padres pulled further away with Ryan Schimpf’s solo homer in the San Diego half of the second to make it 4-1 good guys.

Myers launched a two-run shot of his own in the fifth to make the score 6-1 Friars.

The Yankees cut the lead to four in the sixth with Brian McCann’s solo homer to make the score 6-2 Padres.

The Yankees switched pitchers in the seventh, but the Padres kept it coming.  Yangervis Solarte scored on a passed ball to make the score 7-2 San Diego.

The evening wouldn’t be complete without a hit or an RBI from A-Rod himself and sure enough, he singled in the ninth to drive home McCann to give the game a score of 7-3 Padres.  Gregorius doubled, scoring Starlin Castro and the Yankees crept a bit closer, 7-4.  Aaron Hicks grounded out to score A-Rod and suddenly, the Pads’ lead was two, 7-5.  Gregorius scored on a wild pitch and the score was 7-6 with no one out.  “HERE are the Padres we know and love,” everyone at Petco Park said, uttering a collective sigh.  The people who still believed uttered another collective sigh when the Padres somehow stopped the runs and came away with a narrow 7-6 win.

The Pads and Yanks will play another late Saturday game on Fox Sports One (NOT Fox Sports San Diego) at 7:10 p.m.

Thumping Theodore, The Splendid Splinter, the greatest hitter who ever lived (except the Babe), over .400 one year. I saw him play, with his fluid left-handed swing, at Fenway back in the day. San Diego can be proud of him, including his four years military service in WWII and Korea during the (extended) peak of his career. . . .okay, Liz?

He was a hero for the Sox.  I've been to Fenway and I've seen the red seat in center field where he hit that magical home run.