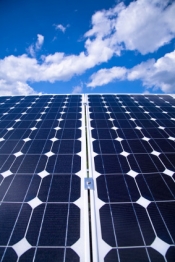 “That’s the best price we’ve ever seen, by quite a bit,” Brad Burton, head of product and development for 1BOG, told East County Magazine. “We provide group discounts, typically about 15% off the marketplace, and we also streamline the process for large numbers of people who all go solar at the same time.” Those going solar now can also take advantage of a 30% federal tax credit plus a statewide rebate, sharply reducing payback time for their solar systems.

Statewide solar rebates are finite funds that are rapidly diminishing," Burton said.  "Therefore, the earlier homeowners apply, the greater financial benefit they will receive." A former cap on the federal credit was lifted last fall, making solar more attractive than ever. Previously, it took 10-15 years to earn back savings from investing in a solar system. Now, Burton reports, “We’re seeing payback periods as low as five to seven years.”

Moreover, the Governor just signed into law a feed-in-tariff measure to allow property owners to sell excess solar energy produced, with profits going to property owners, not utility companies. While details remain to be resolved (such as whether those sales will be at wholesale or resale rates), the payback period for solar will become even less in the future.

“Feed in tariffs are what has allowed Germany to be by far the most mature solar market in the world, because it makes the payback period significantly shorter,” Burton said.

Started in San Francisco by a husband and wife team who organized friends and neighbors to negotiate group discounts on solar photovoltaic installations for their homes, the concept has spread nationwide. “They realized they had a powerful concept—if they group people together in a neighborhood, they would have power in numbers and could negotiate for discounts,” Burton recalled.

1BOG held its first San Diego-area campaign last year. “We had about 950 people sign up with us and about 85 of them ultimately purchased. That represented about 10% of all solar installs in San Diego for 2009.” 1BOG estimates it has saved San Diego homeowners 26% over standard market rates from July 1, 2009 to the present.

A typical 5 kilowatt system would cost about $26,500 under the program in San Diego. Financing is available, with payments typically less than what one saves on utility bills each month.

Another option to make systems even more affordable is a lease program called SunRun. Under that program, however, SunRun owns the solar system and you purchase the power from them, with SunRun keeping profits from any excess power produced.  (Read ECM's article about an unemployed San Diego homeowner who is saving money on his utility bills in his first year of installation through the SunRun program, with only a $1,000 investment.)

In addition to saving consumers money, 1BOG seeks to simplify the process and avoid the need for individuals to sit through hard-sells from multiple companies. 1BOG obtains competitive bids from the top companies in a region, seeking out the best competitive pricing as well as high quality products, a proven track record, and a viable business model to make sure the installation company will be around to service warranties provided.

HelioPower won the bid to provide installation and service throughout the entire San Diego metro region (including backcountry areas in East County) this time.

“We were thrilled to have been selected for the second time to serve the 1BOG San Diego Community,” said Scott Gordon, Vice president of residential sales for HelioPower.

For details, see www.solarSanDiego.1BOG.org. For information on packages available and calculating cost of a solar system for your home , visit http://SolarSanDiegio.1bog.org/campaign-costs.

The company will offer a free webinar on November 19 at 7 p.m. To sign up, visit http://SolarSanDiego.1bog.org/faqs-and-webinar/.

Hi, i have a blog related to "SOLAR" and i want to publish this post on my blog ... could you please allow me to do it ? thanks!

Another option to make systems more affordable is a lease program called SunRun. Under this program, however, has SunRun solar system and the purchasing power of those with SunRun keeping the benefits of any excess power produced. Article (ECM Read about a homeowner in San Diego stop you're saving money on their utility bills in their first year of the facility through the program SunRun, with an investment of $800. andy from free WoW time cards | FarmVille Cash

Thanx for sharing this with all of us. Of course, what a great site and informative posts, I will bookmark this site. keep doing your great job and always gain my support.