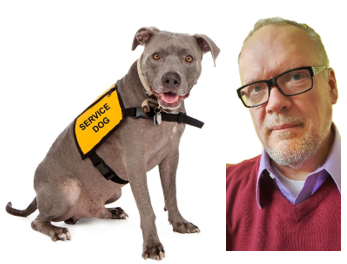 April 1, 2020 (El Cajon) -- A generous group of El Cajon politicians and school board members have come together with donations to the East County animal rescue group RescuingCujo.com to give a pit bull emotional support dog to East County Magazine Contributing Editor Paul Kruze. In addition, a fundraiser for the good cause was held by members of the former Julian Cuyamaca Fire Protection District (JCFPD).

Kruze, has covered many high-stress stories including the rise and fall of former El Cajon City Councilman Ben Kalasho, controversies in the Cajon Valley Union School District (CVUSD), and a firestorm over takeover of the JCFPD by the County of San Diego Fire Authority, along with other hot local issues.

The dog will be officially presented to Kruze by Supervisor Dianne Jacob at a dinner event at the El Cajon Marriott, to be scheduled as soon as public events are allowed again after the COVID-19 stay-home order.

“Paul has made significant contributions to the community with his investigations on government transparency,” said Tamara Otero, president of the CVUSD board. “We would be totally lost without him sitting in front of the dais at our meetings with his colorful dress shirts and signature bow ties.”

“I know that I speak for all of the members of the City Council that we were all kind of let down that Kruze hasn’t been at our meetings as often as he did when Ben was on board with us,” Kendrick said.

“Seeing all of the positive contributions that Ben made while he was on the council, there have been some behind-the-scenes discussions to make Ben a part of the leadership of the City of El Cajon. I could see by appointing him to head one of the commissions that makes recommendations to the City on different matters that Paul will once again enliven the council chambers covering Ben’s work for us.”

The only objection to the donation of the emotional therapy pit bull dog to Kruze has been voiced by San Diego Union-Tribune East County reporter Karen Pearlman.

“I just don’t know how my dog, Chloe, will react to having another dog in the chambers at other city councils where I sometimes report with Paul. It is bad enough to see the political dog fights which happen on the Lemon Grove City Council not to have Paul’s dog try to pick a fight with Chloe. I just won’t stand for it for a second!” Pearlman said.

While pit bulls are sometimes regarded as an aggressive dog breed, Kruze said that he knows that his service dog will do his best to keep him less stressed and cranky during contentious public hearings. He hopes, however, that the dog can be trained to protect him and growl on command during rowdy board meetings.

Mike Van Bibber, fire chief for the former JCFPD, praised Kruze as a “dogged journalist who has been a real pit bull in his pursuit of truth.”

The donation of an emotional therapy dog to Kruze is a far cry from his other recent experience with a dog, when Councilman Kalasho allegedly threatened Kruze with a trained attack dog outside Parkway Plaza shopping mall.

Kruze has not officially revealed what he intends to name his new dog, although some say that after recently watching the 1982 Stephen King classic movie, he is considering naming the dog Cujo. “I am so lucky to have the East County political community care about me so much,” said Kruze.

“As a part of the package, I will get to be a part of my dog’s training," he adds. "Talking with the founder of Rescuing Cujo, Rob Harris, the first lesson is going about when I file California Public Record Act requests with government agencies. Having my canine best friend forever next to me is sure to make me way less stressed the next time a government agency or school district blows off my records request.”

During the COVID-19 emergency, the animal shelter has allowed Kruze to come to its Jamul facility to get acquainted with the canine and begin training. As a journalist, Kruze is considered an essential worker and animal shelters are also on the list of essential businesses allowed to remain in operation.

"Even after the COVID-19 stay-home order is lifted, an added bonus of having my therapy pit bull is that I anticipate he will be great at helpig people around me remember to maintain social distancing," Kruze noted.

“The mission of Rescuing Cujo is to help abused, neglected, abandoned dogs by providing them with shelter, care and affection until a loving home is found where they can live in comfort and safety,” said Harris. “We do this by working with other shelters and rescues, and temporarily housing dogs through our foster program or at our facility in Jamul, California. We believe all dogs can be saved and provided with a loving home, no matter what size or breed.”

The Rescuing Cujo facility not only has pit bulls, but also has other larger dogs including German Shepherds, Huskies, and mixes. Rescuing Cujo is located in Jamul and is always looking for volunteers, says Harris. Its website is rescuringcujo.com. They may be reached at (619) 321-9780.

Harris added that should journalism layoffs occur that impact Kruze, “Worse come to worse, I could see Paul also benefiting by finding a home at our shelter.”

Harris would not say if as a journalist known for his pugnacious ways, Kruze himself would be viable for adoption with a “forever family,’ however.

The shelter director concluded, “Of course, before we would bring him to be at our facility here in Jamul, he would have to be checked for distemper and rabies.”

Personal insults and attacks violate our site rules.  Since the poster reposted the same insulting attack after it was removed once, the poster has now been blocked.

Posters, plesae show civility toward all other posters as well as our journalists, if you wish to retain posting privileges here.

that personal attacks on guest writers are deleted by the blog maven, and the next step is banning. It's quite accepted, and I've been at this for many years. Think about it: A guest should be treated like a guest. It's fine to discuss his/her content, but not attack the person especially when it seems like an imported personal vandetta. The guest might well find fault with a blog maven who DIDN'T take any action against a personal attack and spread the word that guests were not respected at that site. The other factor is that you distract the attention of readers. I don't care at all about your opinion of a guest writer. It's a waste of my time to read such garbage on a public site.