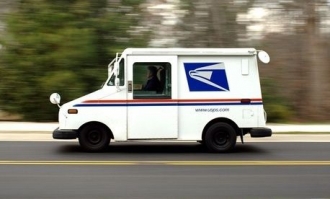 East County News Service
Photo: Postal Truck in Motion CC via Bing
April 8, 2020 (Spring Valley) – A U.S. Postal Service driver suffered a medical issue while driving a mail van on Jamacha Blvd. west of La Presa Avenue yesterday at 11:10 a.m.  The incapacitated driver, 50, veered off the roadway and struck a parked vehicle, then hit the front of a liquor store.
The postal worker was transported by ambulance to Grossmont Hospital, where he was pronounced dead, Officer Jeff Christy with the California Highway Patrol reports The driver’s name has not been released pending notification of family.
A customer in the liquor store sustained a minor leg injury and was also taken to a hospital for treatment.  The building sustained significant structural damage.
An investigation continues into the medical condition that caused the accident, however the driver was wearing a seatbelt; drugs and alcohol use are not believed to have been factors.

The driver is one of many men and women providing vital services while risking their health and the health of their family. The people who deliver newspapers, groceries, home health care and more.