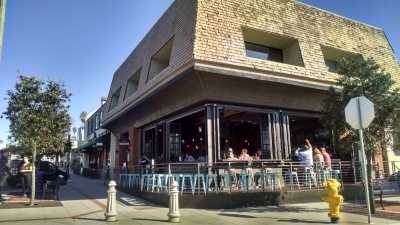 File photo, taken prior to the pandemic: Curbside, one of La Mesa's newest eateries, was designed for only limited outside seating. The new executive order could enable restaurants such as Curbside to expand onto sidewalks or streets, with permission of the City Manager and adherance to other laws.

July 9, 2020 (La Mesa)  -- The La Mesa City Manager today issued an executive order under emergency powers granted due to the COVID-19 pandemic. The order temporarily allows use of public and private outdoor areas by eating establishments for dining, after county health officials banned indoor dining for three weeks starting July 6 due to a growing number of coronavirus cases including some tied to restaurants and bars.

Restaurants must obtain written authorization from the Director of Community Development and comply with all social distancing and other COVID-19 related health orders, as well as all other laws. This includes city and county emergency orders, state laws such as Alcoholic Beverage Control rules, and federal laws such as the Americans with Disabilities Act.

Per the executive order, there is no City fee charged or permit required for businesses that receive authorization to use public and private outdoor areas for dining.  Businesses interested in obtaining written authorization for temporary use of public and private outdoor areas should contact Allyson Kinnard, Senior Planner at akinnard@cityoflamesa.us.

Earlier this week, ECM spoke with Councilmember Kristine Alessio, who stated, “I was approached by Tiramisu, Curbside and Por Favor.” The restaurants, which lacked adequate outdoor seating areas, asked for help. 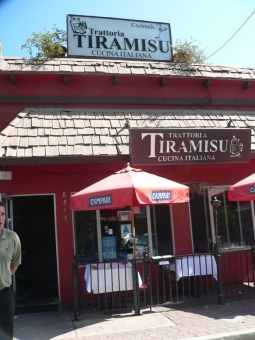 Tiramisu initially closed down completely for several weeks before opening for take-out with just owner David Chiodo and his wife back to work.  Subsequently the restaurant opened for dine-in  only briefly, before  the County ordered a shut-down of indoor dining once again starting July 7.  Though outdoor dining is allowed, the Italian restaurant has only a couple of tables on its small sidewalk patio.  Por Favor similarly has only limited patio space, while Curbside has only a wrap-around outdoor bar, not exterior table seating with social distancing as required by county and state health orders.

The city also sent staff door-to-door to survey businesses along La Mesa Boulevard on whether they may support a full or partial street closure, or a hybrid model such as to allow restaurants to set up seating in diagonal parking spaces on the street.  Alessio indicated the most people “are really in favor of helping out restaurants,” though some hoped to avoid closing streets. “I think there is going to be a lot of enthusiasm for the hybrid version,” she said.  “The riots have formed a lot of cohesion in the village.” She adds, “I told the assistant city manager, “I think you’re going to have to think way outside of the box.

A potential solution proposed by ECM's editor could be to ask the owners of one of the three buildings that burned (Union Bank, Chase Bank, or Randall Lamb) to allow use of their now cleared lots for a temporary outdoor dining pavillion that restaurants might utilize, with canopies or umbrella tables and outdoor lighting that might potentially be donated or leased with city parking fee revenues originally set aside for public events cancelled due to COVID-19.

Asked about restaurants not in the downtown village, Alessio said she is not aware of any zoning that would prohibit them from utilizing parking lots, provided the landlord consents, though those seeking to serve alcohol outdoors would need permission from the state Alcoholic Beverage Control Board.

East County Magazine thanks the Facebook Journalism Project for support through its COVID-19 Local News Relief Fund Grant Program to help  sustain reporting on vulnerable local populations, including minorities, rural communities and small businesses impacted by COVID-19. Learn more at #FacebookJournalismProject. You can donate to support our local journalism efforts during the pandemic at https://www.EastCountyMedia.org/donate.

Just read around and think a little. New York's outbreak? It was still cold. Where do people spend their time when it is cold out? Many states opened in the spring, but surprisingly to some, Texas, Florida, California, and Arizona DID NOT go out of control - immediately. It was not until the weather got hot that people went inside and the current, even more severe outbreak, became a true serial killer. It is true, the chaotic government response and early opening is also a huge killer here (looking at you Gavin), especially when combined with a virus that is surprising in it's difficult epidemiology. But overall, it is the indoors that kill most decisively. Go outside, good people. Breathing indoors, with groups, it is death. Mask, wash, distance and keep the windows open. It is a good chance for Californian's to rediscover (or discover) what makes this place special anyway. Go outside, enjoy this beautiful place and stay healthy!
I didn’t notice this. I might look more into it.