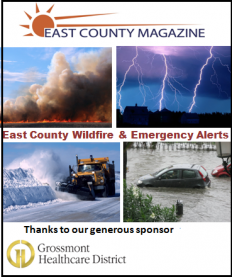 November 9, 2018 (San Diego) – Three major, fast-burning wildfires have forced more than 100,000 evacuations in southern and northern California and shut down a major freeway, with the entire state now under a red flag warning. 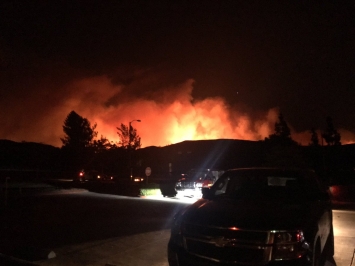 Emergency states have been declared  for Los Angeles and Ventura Counties by Acting Governor Gavin Newsom, with Gov. Jerry Brown out of state, due to two large fires. The #WoolseyFire has scorched over 10,000 acres with zero containment thus far, forcing evacuations from Malibu to Calabasas and Thousand Oaks. It has jumped highway 101 in multiple places and numerous structures have burned. (Photo, right, courtesy of Los Angeles County Sheriff)

The #HillFire started yesterday just five miles from where a gunman massacred 12 people in a bar at Newbury Park near Thousand Oaks.  It has shut down highway 101, charring a destructive path westward toward the Pacific Ocean. Mandatory evacuation orders were issued for Point Mugu Naval Base, all areas of Camarillo Springs, all areas of Vallecito Trailer Park, all areas of Cal State University Channel Islands, Dos Vientos, South Coast.

In Northern California’s Butte County, the #CampFire has destroyed virtually the entire town of Paradise overnight. The Camp Fire has swelled to 70,000 acres and remains just 5% contained, burning north of Sacramento and east of Chico. Other towns or cities in its path include Stirling City, Inkship, Pulga, Concow, Magalia, Butte Creek Canyon and Butte Valley, the San Francisco Chronicle reports.

Five people have been found dead in vehicles in the Camp Fire area, and more fatalities are feared.

Looking back at this year with all of the fires that leveled the landscaping of our cities and the other horrors that we faced, it's scary to think that was only the beginning.