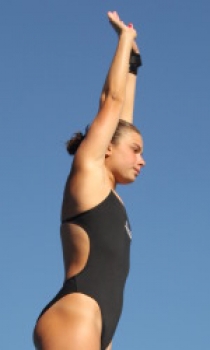 Caplan placed third of 35 divers) in the 3-meter springboard on Friday with an NCAA-qualifying mark of 309.65. Her score of 284.10 in the prelims put her in fifth place and she moved up two places with her effort in the finals.

On Saturday, she took third (of 33 divers) in the 1-meter springboard with an NCAA-qualifying score of 276.15. She advanced out of the prelims after a third-place finish with a mark of 279.60.

Caplan then placed sixth (of 24 divers) on the platform dive on Sunday with an NCAA mark of 225.40 and she moved up one spot from her seventh place in the prelims where she scored 225.25.

The San Diego State swimming and diving team will next be in action this coming weekend at two different meets that get underway on Friday.

The swimmers will be at the A3 Performance Invitational in Monterey Park, Calif., scheduled to run from Nov. 17-19. The divers, meanwhile, will compete at the NAU Diving Invitational hosted by Northern Arizona in Flagstaff, Ariz., Nov. 18-19.