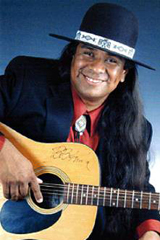 Notes On Air is a monthly music column highlighting local artists,
events, and other music-related news.

In this month’s column, we talk with Tracy Lee Nelson, accomplished
blues musician who is also tribal chairman of the La Jolla Indian Reservation
in Pauma Valley.  Nelson’s music places an emphasis on his heritage,
bringing a Native American perspective to the blues.  His most recent
CD, Indian Reservation, was released in November of 2007

Thank you for taking the time to talk to East County Magazine.

You’ve been playing since you were fairly young.  What
were your earliest musical influences?

I’d have to say my earliest
musical influence was the Beatles.  I
remember when I was young my brother would play their records.  He would
say to me, “You’ve got to listen to this band; you’ve got
to know their names!”  Even more so now; after I understand music
and structure and guitar-playing, I am in awe of some of their formulas and
structure.

Was there any one artist whose work has served as a motivating force
in your decision to pursue a life in music?

I think John Lennon,
because of what he stood for and what he was about; you know—world
peace.  Because I’ve always believed in that, too.  I
believe in honesty and doing what’s right.  I still hear his “Imagine” song,
and there will never be another John Lennon, unfortunately.

What types of guitars do you play?

I play a wide variety of
guitars, but I’ve always come back to Fender
guitars; the Fender Strat (Stratocaster) guitar, especially for the blues.  And,
of course, the traditional acoustic guitar, for the down-home sound of the
blues.

Your music covers a range of styles; acoustic to electric, Delta blues
to blues-based rock.  Are there any unexplored styles or genres that
you would like to delve into?

The hard rock/blues-sounding, dirty-sounding
bar blues is what I’d like
to do next.  Because most of my CDs have been pretty traditional blues,
you know--delta style with the Dobro and acoustic guitars.

What musicians and bands have you had the opportunity to play with,
either in the studio or on the road?

I’ve had the honor of
playing with the 1970s band Redbone.  That
was probably one of the best bands that I’ve played with.  Lollie
Vegas had a stroke in 1995, and they made me the guitar player.  His brother
Pat called me and wanted me to come out to Hollywood, I tried out and they
hired me right there.  One of the biggest shows I played with them was
the Super Bowl in 1996 in Tempe, Arizona.  We opened up for the Four Tops
and Hootie and the Blowfish.  It was really a natural high to play with
them.

Do you have any favorite San Diego County artists with whom you enjoy
playing (either on stage together, or at the same event)?

There’s
a band over here from the Barona Reservation, they’re called
Arrowhead.  And there’s another band called the Rez Band, they were
fun….real grunge rock!  …I’m not sure they’re
even together anymore.

As a Native American blues artist, you titled your first album “500
Years Of The Blues,” and many of your songs deal with life on the reservation.  What
experiences and perspectives have you sought to communicate to your audience
through your songs?

When I was young, I used to play a lot of different
songs and music.  But
nothing really had a message, or a purpose for me.  I was a punk rocker
in the old days…blue hair, mohawk (laughs).  I lived up
there in Hollywood for a while, my roommate was D.H. (Peligro) who was in the
Dead Kennedys.  So I was a rebellious kid back then.

As I grew up, I started thinking about my purpose in life.  You know,
being a punk rocker, it’s all about being different.  I started
to get myself together, and realized I was different and I had a purpose—being
a Native American.  I wanted to share the Natives’ perspective and
history.  If you’re going to tell a story and tell the truth, the
only way it’s going to really come across powerfully and honestly is
through the blues.  And so I started writing about the Natives’ perspectives
on the blues.  Ever since our discovery by Christopher Columbus, we’ve
always had the blues.  So I always share that with people.  So there’s
plenty of blues to sing about.

You also serve as the tribal chairman of the La Jolla Indian Reservation.  How
have your responsibilities in that role affected your continued work in music?

At
the time that I was voted into office as tribal chairman, I realized I had
to put 120 percent into this provision.

So that did affect my music, I had to set it aside.  I think in five
years, I played five times.  When I jump into something, I want to put
my all into it.  This was something that I couldn’t take lightly.  I
oversee 704 members of the reservation and 10,000 acres, and the future of
the tribe, so it is really something you have to take seriously.  I felt
like it was my time to put my two cents in and help the tribe, as did my father,
he was a tribal chairman before.

How did you work music and recording back into your life?

I
actually had to make time for it.  Because being in a stressful job
as chairman, my way in pulling myself together is in playing music.

I have to say that my guitar playing is my savior, and it actually helped
me stay away from drugs and alcohol.  I know it’s hard to believe
for some people, being an Indian, but I’ve never drank or used drugs
in my life.  I think that the high that I get when playing in front of
people, or the feeling I get when finishing a song, or when people clap and
dance to the music is so much more rewarding than any drugs could be.  I
used to break away and go into my room and work on my scales, instead of going
out.  If I did go out, I was the designated driver.

The reservation was hit hard by the Poomacha Fire last October.  Tell
us about that.

That fire actually devastated our reservation, and
completely blindsided us.  Because
at the time, we had our eyes fixed on the Witch Creek Fire that was burning
south of our reservation.  I was in contact with all of the Sheriff’s
Department, and our council, and all the fire chiefs.  I knew we had about
5 days before the fire would hit us.  We stood watch on Palomar Mountain.

And then on Oct 23, at 3:30 AM, the fire hit.  We got calls from a council
member and fire chiefs telling me “Tracy—Fire: Poomacha!  Fire:
Poomacha!  Hurry up; we’ve got to get everybody out!”  That
night the winds were probably between and 60 and 70 miles per hour.  It
was the worst winds we’ve had in years.  “Poomacha” in
our language means “beyond” like a higher place…so out of
nowhere, this fire started from the heart of our reservation.  We tried
to save what we could.  The fire made its way from the center of the reservation,
then to the north and south, and went up Palomar Mountain.  We lost 98
percent of our reservation, and 56 homes were burnt and lost.

How has the rebuilding process been going?

I think
it’s going to take a few years before we really start seeing
changes and improvements.  It is moving—it’s just going to
take some time.  I know a lot of members are still affected by this.  Even
myself, I lost my home.  I lost a lot of guitars, master recording CDs,
and my personal CD collection…a lot of memorabilia stuff I had, too.  A
lot of old pictures of me playing, like with Redbone.  I’m still
slowly trying to figure out what I lost.  It’s gonna take a little
while.

Without any current gaming operations, one of the major sources of
revenue for your reservation has been from its campground along the San Luis
Rey River.  Has there been a drop in campers this summer due to the
fire damage?

I actually have had a lot of calls concerning the condition
of the campground, on whether it was affected.  Really, the campground
wasn’t affected
too much.  A lot of people really love La Jolla, so that was touching,
and we shared with them that the campground was still in good condition and
the water was still flowing.

Has this recent disaster been the inspiration for any songwriting?

It
has inspired me to write a few songs pertaining to the fire, but I think I
am still letting it seep into me because so much went on.  It was
something that was pretty overwhelming.  I wish they had a manual on
how to handle something like this disaster.  But it is really something
you just have to deal with….

What can we expect on your next album?

More blues! (laughs).  A
lot more original songs, and it’s
gonna be rocking this time!  I’ve got a group of guys who really
stand out, and they’re really excellent musicians.

Do you have any upcoming shows?

On September 20, we’re
up in Sacramento, with the Auburn tribe…it’s
the tribal gathering and celebration that they’re having.  Right
now I’m in touch with Pachanga about playing there; I used to play there
a lot.   There’s also talk of a fundraiser show for La Jolla
(fire relief), so that’s something we’re working on.