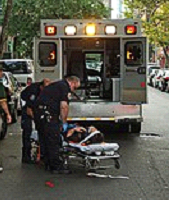 By Miriam Raftery
Photo: CC by SA
February 10, 2021 (San Diego) – By a 3-2 vote yesterday, San Diego County Supervisors shot down a proposal by Supervisor Joel Anderson that would have given law enforcement officers priority to receive COVID-19 vaccines.

“There are over 4,000 local law enforcement officers routinely called to respond to emergency calls, many requiring medical attention,” Anderson stated on Twitter. For example, officers are often first on the scene at injury accidents, violent crimes, and administering life-saving treatments to drug overdose victims.

A letter to Supervisors from the San Diego County Deputy Sheriff’s Association indicates that in 2020, county law enforcement responded to  over 10,000 medical aid calls. The letter further states that outbreaks among law enforcement agencies locally have resulted in staffing shortages and impacted response times, impacting public safety.
Supervisor Jim Desmond voted with Anderson in favor of the measure, while Supervisors Nathan Fletcher, Terra Lawson-Remer and Nora Vargas voted against it.
According to a report by KUSI, citing a state official, California guidelines do give counties flexibility on who should be prioritized to receive vaccines, and some counties have included police officers.
But Fletcher told KUSI on January 28th,  “We are presently following the guidance which is to do healthcare workers, and individuals 65 and older.”
After seniors, next in line for the vaccine are educators, under the state guidelines, followed by first responders including law enforcement and firefighters. So police are likely to receive vaccines in the near future--but not ahead of elderly individuals or front-line medical workers.

they couldn't come up with a voucher system, or something similar. I mean I know this whole thing is moving quickly, new territory and all, but I think there are probably many like myself who would gladly donate their turn in line to a police officer, or front-line worker. Might be something to consider for next time.

teachers since Special Ed students often have such severe breathing and other disabilities that they are unable to wear masks. Teachers are regularly exposed to many children daily, and some schools have kept schools closed until teachers can get vaccines, restricting the children's learning abilities and forcing some parents to quit jobs to stay home with the kids.

I'm not taking sides, just pointing out that there are arguments on both sides.  Seems to me that they should start by alloting each police department and each school a percentage of the vaccines and let them choose who's most vulnerable. A teacher doing remote learning or a police officer with a desk job has low risk, while a beat cop, officers in jails, special ed teachers and teachers with serious pre-existing conditions are at high risk.