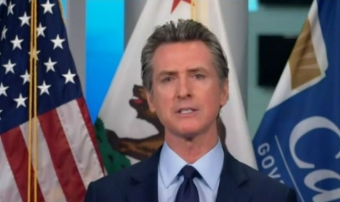 Photo:  Gavin Newsom briefs the press in late December on his plan for reopening schools. Image from livestream

February 21, 2021 (Sacramento) - Disagreements between California’s Democratic-controlled Legislature and its Democratic governor over a plan to reopen schools came to a head this week as lawmakers introduced a bill they say would safely bring students back to campus this spring.

Senate Bill 86 calls on California’s school districts to offer some sort of in-person instruction to students in kindergarten through sixth grade and older vulnerable students by April 15 if case rates in their county fall below 7 positive cases per 100,000 residents, known as the red tier.

you are a trump troll
If you want the schools open, vaccinate the teachers. Seniors are very important too, but outside of health care settings, seniors can in fact shelter in place and stay safe. So why were they the priority? Well, they are dependable voters and this may be the main reason. But clearly getting seniors back to the Cracker Barrel has been more of a priority than opening our schools. Leading to this mess of late re prioritization and what has been overall chaotic, ever changing policy. As for teachers, who did not sign up as first responders or front line health care workers, why would they be willing to go back unvaccinated? And while schools can be opened relatively safely (this is true), that is also putting an awful lot of faith in school districts to provide and manage the resources. We all know what happens in places that are already understaffed and ragged, as our schools are. I know what teachers must be thinking. They have all worked in districts where rosy plans normally and regularly fall apart because of systematic under resourcing. Especially considering that substitute teachers - who are absolutely a key part of keeping our schools running - often don't have health benefits and therefore have even less interest in playing Covid-19 roulette. It is possible to open safe, but not too likely that our schools can do it with consistent competence. I'm more convinced than ever that Newsom will be recalled. Wacky righties might be able to get their recall election, but I can imagine teachers will have the opportunity to select someone more favorable than Newsom through their sway in the Democratic party. Teachers can win the recall that Rs have teed up for them. Newsom is playing with fire by building a coalition of professionals, unions and the disaffected but ornery and highly motivated right wing, all against him. Not to mention, parents! I think all of the equivocation, finger in the wind, triangulation and frequent shifting of attention to different voters who want (or need) vaccinated has already pleased nobody by trying to please everybody. It was a needle that could not be threaded. Unclear priorities and shifting with the wind may doom Gavin Newsom. I will vote for recall, and for the most likely progressive candidate to replace him.
on line learning is working fine. why do you want to waste millions on a recall? his term is up in 2023. I know why, it is because when you trump loving righties do not get your own way you cry "RECALL". SHAME!
No. I am against the recall. It is just that I may very well vote to remove if it happens. And only if someone better than Gavin Newsom - preferably to his left - has a good chance to win, otherwise I will vote no on recall. Newsom is good on many issues I support, but just deeply flawed in so many other ways, especially regarding Covid. Forcing teachers to work without a vaccine is unacceptable! One more thing, online learning is not fine. It is highly flawed. Yet it remains the main way we can continue teaching right now. It is better than nothing.