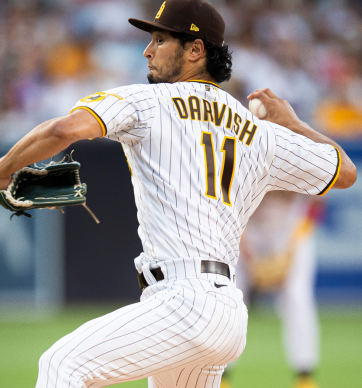 By Liz Alper
Photo:  Yu Darvish became the first pitcher in MLB history to record 1,500 strikeouts in under 200 games.  He was dominant today, pitching six and only allowing two hits, one earned run, one walk and striking out 11.  Via @padres on Twitter
June 21, 2021 (San Diego) - The Padres are riding high off of a (hard at first but then much easier) sweep of the Reds.  Now they went back to the NL West and to their hated rival, the Dodgers.  Julio Urias started tonight’s game one for L.A. against Yu Darvish.

Things started slow with Jake Cronenworth’s double that scored Pham in the first.  And then, Manny Machado blasted a three-run homer to give the Padres a 4-0 lead after one.

Ex-Red Sock Mookie Betts put the Dodgers on the board with a solo homer in the third.  The Padres kept a 4-1 lead after three.
Cronenworth did it again with a two-run bomb to right in the fifth to kick Urias out of the game.  He was replaced by Phil Bickford, who eventually got out of a jam, but the Padres led 6-1 after five.
The Dodgers got a consolation run in the eighth on (the other) Will Smith’s solo homer to left, but the Padres took game one from the Dodgers easily with a 6-2 win.  They move to 43-32.
UP NEXT
Game two is tomorrow night at 7:10 p.m.  Clayton Kershaw starts for L.A. against Blake Snell.  The game will be on MLB Network as well as BSSD.  It's also MLB.tv's free game of the day.