Swainston is one of four challengers and three incumbents running for El Cajon City Council. 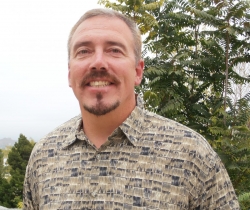 September 15, 2012 (El Cajon) – Duane Swainston wants to end the “good ole boy” network on El Cajon’s City Council.  “There seem to be a lot of back room deals and not enough transparency where people know what’s going on,” he says of the current council members.

Swainston aims to bring his 16 years of experience in management at private sector manufacturing companies  to the job as councilmember if elected.   He holds a degree in business management and has worked for two of El Cajon’s largest employerse, Senior Aerospace Ketema and GKN Aerospace Chem-Tronics.

“It’s a cost-conscious, schedule-dominant world focused on quality,” he told ECM in an exclusive interview.  “If you’re not doing things faster, better, cheaper, then you’re getting bypassed by your competition.”

His website likens the city to a gift box in need of some decoration and value inside.  “My goal is to make El Cajon into that present  that people are happy about. People want a city where they feel safe, that is affordable, that has economic opportunities, and has activities for them and their children. My Plan will focus on these issues,” his website states.

A self-described conservative who believes in fiscal responsibility and opposes new taxes, he also believes that economic revitalization is key to improving El Cajon’s bottom line and creating jobs.  “I’m looking at recruiting businesses that would be unique to our region, such as an outdoor superstore such as Cabela’s and Outdoor World.  That makes perfect sense for East County,” says Swainston, an outdoor enthusiast who enjoys  camping fishing and hunting as well as a competitive off-road motorcycle racer and past winner in the Over-the-Line Tournament.

He notes that El Cajon has made some improvements in recent years, but believes the city needs a draw to “bring in consumers countywide”  into the downtown district.  He supports investment in a hub for   arts and entertainment .  “I will help to ensure that the East County Performing Arts Center is a well managed venue for Arts and Entertainment,” says Swainston, a member of the ECPAC Foundation working to reopen the theater shut down by the city.   “I think it is possible to be self-sustaining after the theater gets running again and has an established clientele…The management group, whoever that may be, can make money through concessions and merchandise –not just the performances.”

Ultimately he believes it’s possible for the theater to be fully run without subsidies, but recognizes that help will be needed initially including maintenance and utilities.  He opposes turning the theater site into a hotel as Council recently considered, but would support a hotel downtown at a different location when the economic conditions make sense in the future.

He wants to fill some vacant land in El Cajon with new businesses. He also wants to work with contractors to “impose incentives for finishing projects ahead of schedule and penalties for delays.”

Swainston levels tough criticism at incumbents.  “Communication, cooperation and respect are keys to being a successful leader. Unfortunately, many residents feel the current leadership is making backroom deals and driving their own agenda without input from the public.  I am a big advocate for transparency in government and keeping the public apprised of the decisions and actions that are being made.”

He supported the Charter City ballot measure, which was passed by voters. But he acknowledges, “With the new Charter City status there is more pressure and responsibility on the city leaders to make the right decision.” His goal is to make El Cajon “the most efficient and well-managed city in California.”

He faults council members for voting as a block, rarely challenging one another. “That’s how ideas and improvements are made, by challenging the status quo.” He also criticizes the council for filling a vacancy by appointing an insider off the planning commission (Tony Ambrose) after Councilwoman Jillian Hanson-Cox resigned amid an FBI probe. (Hanson-Cox subsequently pled guilty to two federal charges.)   In a blog on his website, he faulted the Mayor and Council for dismissing members of the public who showed up at a public meeting and asked to be considered—including Swainston.

“It seems like a deal was already established,” he observed, calling the appointment a “backroom deal.”  He added in his website post, “I believe they are doing a grave disservice to the city of El Cajon with this mentality.”  He has also faulted council for appointing incumbents to various city commissions instead of embracing new candidates who could provide “new ideas and new energy.”

He has also denounced the destruction of  campaign signs belonging to another opponent, Ben Kalasho, as well as pressures put on local businesses to post only signs for incumbents Bill Wells and Tony Ambrose—even at a restaurant where Swainston had planned to hold a fundraiser.

“I believe it has to do with a certain developer that owns most of the property in the downtown area and doesn’t want to see any changes for fear that his `sweet deals’ may come to an end,’ he wrote in a blog post titled El Cajon Politics Getting Ugly.  It is my opinion that this developer is forcing his tenants to `toe the line’ and place these supporting signs at their establishment whether they agree or not. It seems kind of like a `mafia’ type of intimidation technique to me.”

Swainston supports changes made to city employees’ pensions to  save the city money, but adds, “I care about the city employees also. They’ve been asked to contribute to their pension plan which I agree with, yet they haven’t had any raises in years and the cost of living is putting them in the hole.  We need to do something…If city employees are not getting raises that says we’re not doing our jobs.”   That said, he also believes employees “are not being asked to work up to their capabilities.”

He also would consider outsourcing some services that could be “run more efficiently through a competitive bidding process.”

He supports a balanced budget and cuts where appropriate, but not at the expense of public safety or people in need.

He supports a strong police force dedicated to “tracking parolees and sexual offenders” and keeping criminal activity out of El Cajon. He also supports “better base pay for police and fire services and access to equipment needed to stay a leader in the field.”

His platform calls for recreation activities and after-school programs for children, improvements to local parks and investment in facility upgrades, as well as adult programs and sports leagues, seasonal events and attractions. Thinking outside the box for funding sources, he envisions “possible corporate sponsorship” of parks, the arts center, and more.

He faults the city’s development plan for lacking details on recruiting, retaining or helping businesses thrive—as well as lacking incentives for developers to make new residential housing a reality.

Asked about homelessness, he replied, “I really haven’t had a chance to delve into how serious the issue is.”  But he noted that the city has “one of the highest poverty rates.”  Asked about the city’s past support of condo conversions over rentals, he noted, “If we help low income people find housing I have no problem with that…but it’s what the market is willing to bear,” adding that condo conversions don’t make sense in the current economy.

A 20-year-resident of El Cajon who has lived in East County for 32 years, Swainstom and his wife, Linda have been married for 23 years and raised two children who graduated from local high schools.  “I have a clean slate and my life is an open book,” says Swainstom, a member of Foothills Christian church with conservative values on social issues.

He pledges to support diversity.  “That’s what makes El Cajon great,” he told ECM, citing the city’s large population of immigrants including many Iraqi Chaldeans and Mexican-Americans.  “We embrace those traditions and make people feel at home.” He added that at work, in sports and on the ECPAC Foundation, he has worked well with people from diverse ethnic backgrounds and political viewpoints.  “When you are coming together for a common goal, those things are set aside.”

This is Swainston’s second run for a council seat.  Two years ago, he finished second and spent just $400.  This time, with more name recognition, he says he’s started campaigning earlier and is doing some fundraising in hopes of proving victorious in November.

He believes it’s a mistake for city leaders to fault the economic downturn for what he views as the city’s “failures,” adding that city leaders need to “create their own future.”

He pledges to put in the time to make El Cajon a “better place to live, work, and be entertained. I will challenge the status quo,” he concludes.  “I understand from my manufacturing experience you can never rest on past achievements; you must continue to get better.”

For more information on Swainston’s campaign, visit his website at http://dswainston4council.weebly.com/index.html