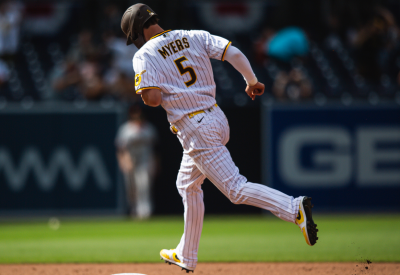 By Liz Alper
Photo via @padres on Twitter
April 7, 2021 (San Diego) - After splitting with the Giants last night, the Padres had the opportunity to take the series today in the finale.  Kevin Gausman started for San Francisco against Blake Snell.

Things got started early in the second with Darin Ruf’s two-run homer to center to give the Giants a 2-0 lead after two.

The Padres cut the lead in half in the fifth with Jorge Mateo’s RBI single to center that scored Jurickson Profar.  The Giants led 2-1 after five.
The Padres tied the game finally in the eighth with Wil Myers’ solo homer to left center and we were tied at two after eight.
We headed to extras and the Giants reclaimed the lead on a Donovan Solano sac fly in the 10th that scored Poway alum Alex Dickerson and the Giants took the 3-2 win to the house to take the series.
UP NEXT
The Padres finally get their first day off of the season tomorrow before their first road trip this weekend to face the Rangers.  First pitch from Arlington is set for 5:05 p.m. on Friday night.  Grossmont alum Joe Musgrove starts against Kohei Arihara for Texas.