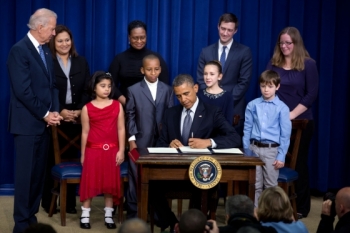 Update: ECM has obtained the complete list of Executive Actions taken by the President from the White House press office. View them here.

The President has the backing of most Americans, according to several new polls which found strong support for key elements of the proposal.

An ABC poll found that a whopping 89% would favor a law requiring background checks on people buying guns at gun shows, while 75% would require background checks on those buying ammunition. A full 71% would support creating a federal database to track guns sales.  A slimmer majority favors banning semi-automatic handguns (51%), banning assault weapons (58%), and requirig armed guards in schools (56%)

A new TIME/CNN/ORC released yesterday found that 55% of Americans approve of the job Obama is doing as President, compared to 43% who disapprove. That ratio mirrors the public’s support for tighter restrictions on guns, with 55% favoring stricter gun control laws and 44% opposed.

Some gun owners have assailed the plan by claiming it violates the Second Amendment, which protects the right of the people to bear arms for a well-armed militia. Others note that the founding fathers lived in an era of single-shot muskets and likely never envisioned weapons of mass killing. Certain weapons are already prohibited for ownership by private individuals, such as shoulder-to-air missiles and tanks.

The National Rifle Association (NRA) has attacked the plan and called for arm guards in schools instead.  Now the NRA has gone farther, running an ad that takes aim at the President’s children. The ad criticizes President Obama as an “elitist hypocrite” for seeking to halt violence against children such as the Sandy Hook elementary school mass shooting while allowing protection of his own children by armed Secret Service guards.

The NRA ad has sparked criticism even from some staunch conservatives. Joe Scarborough, conservative commentator on MSNBC, sharply condemned the NRA ad for attacking the President’s family and putting “targets on their backs.”  Co-host Mike Brezinski called the NRA “out of step with the mainstream” and told his audience, “You should be embarrassed to be part of the NRA at this point.”

The White House proposal is the result of recommendations made by a task force headed by Vice President Joe Biden.

President Obama, in announcing his plan, stood flanked by family members of gun violence victims.  He listed off a series of recent mass shootings including the Aurora, Colorado theater shooting, the shooting of former representative Gabrielle Gifford, a mall shooting in Oregon and numerous school shootings as evidence that action is needed – and wanted by most Americans.

“Now is the time to do something about gun violence,” he said. “This is our first task as a society. This is how we will be judged.  And their voices should compel us to change.”

The President acknowledged that implementing some of these changes will be difficult, but vowed to make it a priority: “I intend to use whatever weight this office holds to make them a reality. Because while there is no law or set of laws that can prevent every senseless act of violence completely, if there is even one thing we can do to reduce this violence – if even one life can be saved – we have an obligation to try.”

President Obama signed sign 23 Executive Actions yesterday aimed at keeping kids safe from gun violence. However, the most major changes will require Congressional action, including the elimination of all loopholes and require a universal background check on anyone trying to buy a gun, restoring the ban on military-style assault weapons and a 10-round limit for magazines, and creating tougher penalties on people who buy guns with the express purpose of reselling them to criminals.

Those proposals are expected to face stiff opposition in the House, which is controlled by Republicans who in the past have opposed any gun restrictions.  House Speaker John Boehner has not issued a statement yet on the president’s plan, though his spokesman Michael Steel stated that the "House committees of jurisdiction will review these recommendations,"adding, "If the Senate passes a bill, we will also take a look at that."

San Diego Republican Congressman Darrell Issa criticized the president's executive orders as "imperial" and called it an "abuse of power."

Obama has issued fewer executive orders than any president in the past 100 years.  The President affirmed his belief that the Second Amendment guarantees an individual right to bear arms, and said he understands that most gun owners are responsible. But he added, "I also believe most gun owners agree that we can respect the Second Amendment while keeping an irresponsible, law-breaking few from inflicting harm on a massive scale. I believe most of them agree that if America worked harder to keep guns out of the hands of dangerous people, there would be fewer atrocities like the one that occurred in Newtown," the President concluded.  "That’s what these reforms are designed to do. They’re common-sense measures. They have the support of the majority of the American people.”

San Diego County has been the scene of at least five school shootings (Santana High, Granite Hills High, Cleveland Elementary, Carlsbad's Kelly Elementary, and SDSU, where a graduate student opened fire on professors).   Other mass shootings have occurred in our region, including the McDonald's massacre in San Ysidro in 1984, which killed 21 people (including five children) and injured 19.

Thousands of gun advocates gathered peacefully Saturday at state capitals around the nation to rally against stricter limits on firearms, with demonstrators carrying rifles and pistols in some places while those elsewhere settled for waving hand-scrawled signs or screaming themselves hoarse. Also Saturday, accidental shootings at gun shows in North Carolina, Indiana and Ohio keft five people injured. In North Carolina, a 12-gauge shotgun accidentally discharged as its owner was taking it out of its case, injuring three slightly, state officials said. None of those injured in the other shootings suffered life-threatening injuries, authorities said.