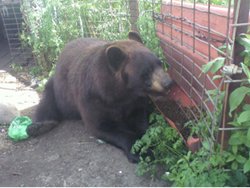 April 3, 2013 (Alpine) – Lions, Tigers and Bears created a new habitat for two black bears last year.  The new arrivals were Sugar Bear, rescued from a failed sanctuary in Ohio, and Meatball, whose antics including swimming in backyard pools and stealing meatballs from a freezer meant he could no longer live in the wild.

Now, LTB founder Bobbi Brink has learned of seven more black bears in Ohio in desperate need of rescue -- so she is seeking donations from the community to help.

“These seven bears have never known the life they deserve,” Brink says. “One, named Maddie, was originally purchased as a pet. Unsurprisingly, her family was unable to care for her as she grew, and they considered selling her to a canned hunt ranch. Her current owner stepped in to spare her that fate, but has only been able to provide a corn crib for her habitat. That is where Maddie has spent the past seven years.”

The other six bears have a sad story as well. Some of them lived with an exotic "exhibitor" who was cited for hundreds of animal welfare violations, including poor nutrition, neglect, and conditions the court described as "deplorable" and "squalid," Brink notes. “Their current owner has far better intentions, but does not have the facilities or resources to properly care for the bears. For example, all six bears are kept in a 15'x20' enclosure. That is not a misprint - six bears in a 15'x20' enclosure!”

Their owners have reached out in an effort to find them a more appropriate home, and LTB is responding, but needs funds for the project.  Brink is searching for a permanent home for the bears, where they will receive the care they deserve in a safe, enriching environment. Before they can be moved, the two males must be neutered, and all will need a thorough medical evaluation. Adding the cost of transport, this rescue will cost up to $40,000.

A team from LTB will drive to Ohio, coordinate and conduct the medical evaluations and neuterings, and transport the bears to their new homes as soon as our medical squeeze and transfer cages are completed and new homes have been found.

Meatball continues to settle into life at LTB, as grading and laying the groundwork for his new six-acre habitat is underway. About a third of the $300,000 estimated cost has been raised.