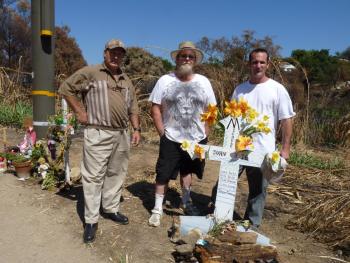 “Through the years that we had known you,  you had been a blessing to know. How sweet and kind you are to all our family. We will cherish every moment and memories we had with you. We love and miss you and you will never be forgotten.” – sign beside the road, where Michelle St. Clair was fatally burned

May 30, 2013 (Lakeside) – Beside the scorched earth where Michele St. Clair was found severely burned during a brush fire on May 12,  her friends have created a makeshift memorial . Flowers, crosses,  ragged stuffed toys and a hand-lettered sign on cardboard reveal how she touched the lives of those who came to know her, before succumbing to her injuries on May 16.

St. Clair, a Navy veteran who by all accounts worked hard, refused to take handouts, and was not an alcoholic or an addict when she died.

“She was an awesome person, so down to earth. She’d help anyone out,” said Jay, who asked that his last name not be published.  Jay has spent 4 to 5 years homeless.  He explained how the homeless people here—St. Clair’s family for all practical purposes—made the memorial. “We saw a cross at a thrift store and they gave it to us. We got flowers at Wal-Mart.” 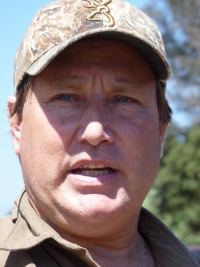 She was burned so badly, that had she lived she would have lost both legs, all of her fingers, and her nose, Walter Choate (photo, right) said.

He told ECM that St. Clair would wash windows at homes of wealthy people in East County to earn money.  She also had a daily route collecting cans, crushing them at her camp before selling them for recycling.

On Mother’s Day, he saw her carrying a sack of cans, her step jaunty, her mood upbeat  “She was a little brown-headed, green-eyed girl,” he said, shaking his head. “So vibrant and full of life.” Just hours later, firefighters found her charred beyond recognition by the highway, where she appeared to have crawled seeking help.

Jason Bornowski (right, in photo above) confirmed St. Clair’s sense of independence and industriousness. “If you lent her money she would give you IOUs. She wouldn’t take a handout,” he said.

Fire officials have not determined the cause of the fire, which burned nearby mobilehomes and vehicles, leaving other families homeless, too. 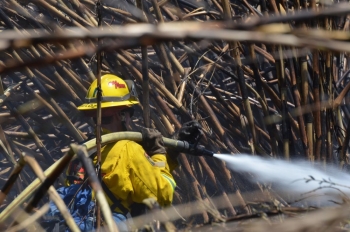 St. Clair was listed as a Jane Doe at first, after the fire.  Her boyfriend of many years, Joe Garcia, had to make the heart-wrenching decision to end her life support. Joe was too distraught to talk with media.

There is  one bit of comforting news for Garcia; neighbors offered him a temporary haven in a trailer at a mobilehome park after the homeless camp burned down.

No one here knew how Michele St. Clair came to become homeless, though most have known her for several years.  She never talked about her past, where she came from, or if she had family somewhere.  She did speak with pride about her service in the U.S. Navy.

Choate had been working to help those in the homeless encampment that burned down here.  He has dreams of starting up a business, www.TireUpCycles.com, that would hire homeless people to help create children’s swings and other products out of recycled tires.  He has applied for a Cal-Cycle Loan program. 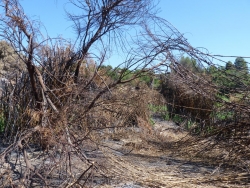 He wants to hire people like Jay and Jason, as well as Keith and Darla Boley, who also came to pay their respects.

“Both of us were heroin addicts,” Keith Boley (center, photo at top of story) said, then explained how he came to turn his life around.

“I’d come to the end of my rope. I hung a noose—but I had five kids and seven grand kids. I said, I can’t do this, and got into rehab.”   He and Darla lost everything due to their addiction, before moving to California and starting new lives, thanks to a sober living home.  Now they have a home of their own – and welcome homeless people to stop by after church each Sunday as they now strive to help others in need. 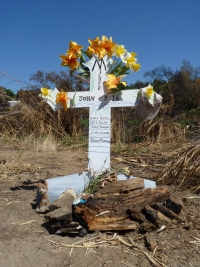 Choate spent two years living among the homeless, enduring rats in the beach areas and theft of his belongings in urban arease. He explained how finding a place to camp like this spot tucked among bamboo-like rushes along the San Diego riverbed may be viewed as “paradise” by homeless people who have been pushed out of other places by police. Yet most still yearn for a clean, safe place to call home.

San Diego County provides no homeless shelter in its vast unincorporated areas. Nor does any city in East County, leaving homeless people with no place to go, other than church or privately run places offering aid.

Some do want to help.

“Give me a shop, and I’ll employ people,” said Choate, whose family runs a tire recycling business in Texas. He has sold his swings to local schools and also has a range of other products that he hopes to make—all while helping homeless people get off the streets and out of the riverbeds in East County.

But any such help will come too late for Michele St. Clair.

Shortly after her death, a measure to increase funding for homeless veterans was approved by Congress, Congresswoman Susan Davis announced.

But ironically, a Homeless Bill of Rights that might have helped people like St. Clair failed to win passage this week in the California Legislature, postponed until next year.

The bill would have prohibited the criminalization of homelessness, such as laws passed in some local jurisdictions  in East County, making it illegal for homeless people to sleep in public places such as parks or civic plazas.  So such laws may continue to force those with nowhere else to go into even more unsafe places—such as the tinder-dry brush along the Lakeside riverbed where Michele St. Clair lost her life.

This is a nice story, about her. May she rest in peace. I cant imagine the horrible way she died, it makes me so sad. In all fairness though I new Michelle she was in Navy, but kicked out, for reasons I don't know. She had a son with Russell davis while he was in Navy, while he was in Somila she left him and her son, addicted to meth. I met her soon after, and we had a child Bailey White, she could not get over her addiction enough to ever be a part of his life, sad not trying to be mean, but the truth is the truth. Joe was a scumbag looser addicted to meth, and enabled her addiction. She died because he could not get off drugs, and provide her a home. I am angry, fuck you joe, worthless piece of shit, that you are, I doubt you will ever see this post, as a you are probably living on streets, but if you do, please know that from the bottom of my heart I hate you, I hope every day is a reminder of what you did, to two boys. I also hope to see you sometime, 385 218 2004