From Big Picture to Specifics 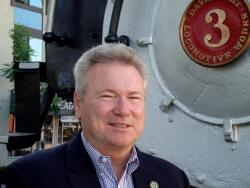 In part two of this series on election races in La Mesa, East County Magazine spotlights incumbent Ernie Ewin. For this series we asked all candidates the same set of questions on local issues, with an open invitation to bring up anything else they would like to discuss at the end of the session. We want each candidate to speak for themselves.

September 2, 2010 (La Mesa) --Talk to Councilman Ernie Ewin about issues in the community and you’ll hear a wide-reaching perspective. From his early days in first grade at Murray Manor, to serving as Student Body President at Grossmont Community College, and on to San Diego State University, his roots in the community run deep.

Ewin’s first term on the La Mesa City Council was from 1985 to 1990. He chose to go back into the private sector until 2002, when he was elected again and has been serving ever since.

He is involved in numerous public organizations, bringing a regional perspective to his duties in La Mesa. In addition to sitting on the Council, Ewin represents the City on the Metropolitan Transit Board (MTS), where he has chaired the audit committee for two years and serves on the safety committee. He is Chair of the Metro Waste Water Joint Powers Authority. He also serves as the Executive Director of the Grossmont College Foundation. In addition, he is the current Chairman of the Prop G Grossmont Healthcare District's Independent Oversight Committee, serves on the board of the East County Visitors’ Bureau and sits on the Grossmont College Foundation Board, of which he currently serves as Executive Director.

He worked for over 30 years in the banking and financial service industry, and currently owns and operates the consulting firm of Ewin & Associates.

Ewin has been married for 39 years, has four children, and 11 grandchildren. He has lived in East County since 1952, and La Mesa for 33 years.

Based on his knowledge of the community and its history, Ewin starts discussions of current issues from a wider perspective, then moves into specifics. The foremost challenges that the City faces today are the fiscal impacts arising from a downturn in the greater economy, he says, which affect our “ability to control our own destiny.” 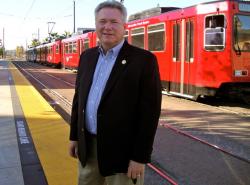 Prop L, which raised La Mesa sales tax by ¾ of a cent, “gave us the safety to keep the state’s hands out of our funds,” Ewin said. He voted to put the measure on the ballot and added a provision requiring that City reserves be maintained at a minimum level and supported the position of its sundown date.

In his candidate statement for the ballot, he thanks the public for their support of Prop L. “Things are very tight. Our challenge is to walk our talk relative to Prop L, to maintain our quality of life. If it is important when times are good, it is also when times are hard,” stated Ewin.

He stressed the importance of fiscal responsibility, and addressed recent agreements between the City and three of its four employee groups. “In 2000 CalPERS presented to the Governor that its obligations were sustainable, but now things are unsustainable,” he said, and pointed out that La Mesa, like many other cities, made all the contributions and had all the risk.

He called a two-tier pension system “an absolute necessity,” adding that the CALPERS projection “never was possible, and now we’re living the worst of it.”

Other central issues for Ewin are economic development and maintenance of our infrastructure. He stresses the importance of public-private partnerships. As an example of such a partnership, he cites the Grossmont Trolley Station, which provided housing, funded an elevator at the station, and brought in a half a million dollars for parks.

Our Village is a Treasure

Ewin called the Village a “treasure”, and sees it as an opportunity for another public-private partnership. He would support a Business Improvement District, if the advisory group brings that recommendation back to Council. He wants people to feel that the Village is safe, clean and there are things to do there. “We can provide as much leadership as we can, but the property owners need to fall in line. We need something that attracts and it’s not low rents that attract, it’s good businesses.” 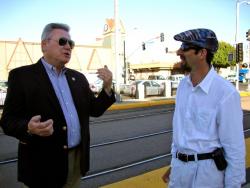 The City is in the planning stages of a Village Improvement Project. “I like the process that's underway; there’s plenty of input,” he stated, and continued, “I’m excited that we have a grant and some other funds from the meters,” a contribution from the public he says will have an impact on the Village for years.

ECM asked all the candidates about the Park Station Project that has been proposed to redevelop all the property along Highway 8 between Spring Street, University Avenue and Baltimore Drive.

“Everybody has the right to make proposals. The Environmental Impact Report is still being completed and it has to run the process. It has to make sense for the location, the surrounding neighborhood. We need to look at the whole thing. You can’t just look at a project, you have to look at it as a catalyst. You don’t want to be dealing only with exceptions,“ Ewin said. He stated that he is “bringing a lot of experience and approach to be sure that everything is fair, and not just that but for citizens and generations that are not here yet.”

Ewin’s work with Councilman Mark Arapostathis has lead to a workshop last week, in which they met with neighborhood watch captains to talk about expanding the program to include emergency preparedness as well. “We have 455 streets, and 110 have Neighborhood Watch,” Ewin said, adding that he would like to continue to work to see that number grow.

He summed up his work as a Councilman, saying, “What I’m doing is an ongoing process. It’s not something that starts and ends with elections. If I have one concern it’s that great ideas and suggestions have to have an election; it should be ongoing. You have to be willing to put yourself out there. I’ve brought ideas for 8 years and I’m going to continue to bring ideas.”

A routine background check of court and county records, which ECM conducts on candidates for higher office, turned up nothing except standard property transactions.

Incumbents Ewin and Arapostathis are both up for reelection in November, squaring off against four challengers: Patrick D. Dean, Byron Reed, Kevin Rynearson and Ian I. Shiff. ECM will be profiling each of these candidates in the coming weeks.

For more of our La Mesa Spotlight series, see: 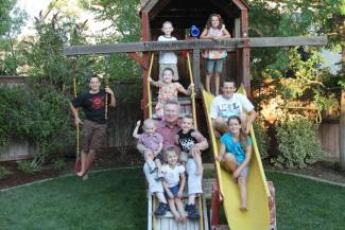