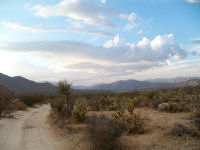 At Nov. 4 hearing, county planners should reject cell phone tower in heart of our small town

By Lisa Rene Anderson
October 27, 2011 (Julian)--On November 4th, 2011, the San Diego County Planning Commission will render their decision on whether to approve a proposed cell tower to be placed in the center of residential-zoned Shelter Valley, Julian- the tiny, dark sky-designated rural town at the edge of the Anza Borrego Desert State Park that I and my husband live in.

Three years ago, we moved to Shelter Valley precisely because I had gotten sick from electromagnetic microwave radiation. After years of living in San Diego proper, I could no longer hold a cell phone up to my head without getting dizzy and I was concerned about the brain tumors associated with prolonged exposure to cell phones and even cordless phones. Also aggravating my health were the three cell towers, hundreds of microwave antennas and WIFI connections around me in the city, and the eventual onslaught of smart meter installations.