By Walter G. Meyer
November 24, 2011 (San Diego) -- How many people have been bullied at school?  When Councilman Todd Gloria asked that question of adults during a screening of the film “Bullied” at Lestat’s West in Normal Heights, the vast majority raised their hands.
How do we reduce bullying and protect students from assault? Should bullies receive counseling instead of merely punishment? These were among the questions raised—and answered--at this event in which I participated as a speaker. 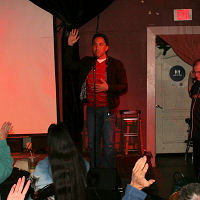