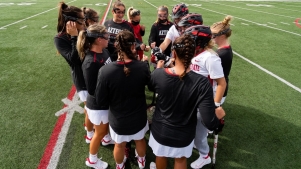 Lexi Tan led the Aztecs on the offensive side of the ball. Tan's stat line included three goals on five shots, 2-2 on free-position shot attempts, a ground ball, and a caused turnover. Other SDSU scores came from senior Emily Resnick (2), senior Bailey Brown (1), and junior Cailin Young (1). The Aggies’ scoring leader was Maddie Myers and Sorana Larson, each finding the net five times throughout the game.

On the defensive end of the ball, Brown led the way once again for San Diego State. She totaled another impressive performance which included three ground balls, two caused turnovers, and four draw controls. Junior Shelby Hook caused two turnovers while netminder redshirt-senior Katy Sharretts led the team with five ground balls. As the Aztecs’ goalkeeper, Sharretts earned 11 saves and a .397 save percentage.

The Aggies led the Aztecs in almost every statistical category, including shots (40-to-23), ground balls (21-to-19), and free-position shots (8-to-4). The teams each drew 13 draw controls throughout the game.

SDSU got off to a quick start and easily accumulated a 4-2 lead over their MPSF Conference foe with goals from Young, Brown, Tan, and Resnick to kick off the game. From there, it was all Aggies on the scoring front, as UC Davis outscored the Scarlet and Black 16-3 in the last 42 minutes of play.

The Aggies did not allow the Aztecs to score back-to-back goals for 42 minutes of play. In that period, UC Davis had two 5-0 and two 3-0 scoring runs to outscore the Aztecs 16-3.

“UC Davis is a very well-coached program,” head coach Kylee White said. “We saw improvements in today’s game but Davis came out with aggressive play throughout the entire game. We are hoping to take what we learned from this game and turn it into even more success on our road trip to Colorado next weekend.”

The Scarlet and Black hit the road to the Centennial State for a two-game road trip. San Diego State first meets the University of Denver on March 12 for a 1 p.m. MT/noon PT game. Just two days later, SDSU and the University of Colorado go head-to-head. The opening draw between the Aztecs and Buffs is set at 10 a.m. MT/9 a.m. PT.