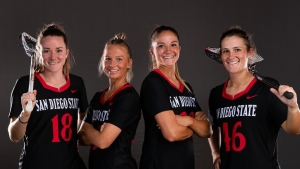 The Aztecs, who are competing as an independent after the MPSF folded last year, will make two trips to the East Coast in addition to playing at Northwestern. In total, SDSU will play four Pac-12 schools, three Ivy League programs and two Big 10 teams.

“I am really happy with the quality of our 2022 schedule where we are playing some of the best teams in the country,” White explained. “Being an independent this year, we envision our strength of schedule will give us a great opportunity to earn an at-large bid for the NCAA tournament.”

The Aztecs will have their annual alumni game Jan. 29 before hosting Claremont-Mudd-Scripps Feb. 5 for an exhibition.

SDSU will then play their next five games on the road, including four at Pac-12 schools. On Feb. 12, the Aztecs travel to USC. SDSU knocked off the Women of Troy 14-13 on the road in overtime last season to earn their first win over USC in program history.

On Feb. 18, the Aztecs will play at Cal, who they have a six-game winning streak against, and then at UC Davis, their former MPSF foe, Feb. 20. The Aggies were the 2021 MPSF champions.

The following weekend SDSU will play at Arizona State Feb. 25 before flying up to Eugene to take on Oregon Feb. 27. The Aztecs have beaten the Ducks in each of their last three meetings.

SDSU then returns to San Diego for four straight home games, beginning with a March 12 clash with Princeton. The Tigers, along with all Ivy League schools, didn’t play in the 2021 season due to COVID-19 but were ranked No. 14 in the country in 2020 before the season was canceled.

After facing Marquette March 15, their first meeting against the Eagles since 2013, the Aztecs welcome in Drexel March 23. The Dragons went 13-3 in 2021 and finished the year ranked No. 15 in the nation.

On March 27, Denver comes to town. The Pioneers had a 16-2 record last year and advanced to the second round of the NCAA Tournament.

SDSU will be road warriors for the next three weeks, embarking on three long trips. First up are games at Quinnipiac (March 30) and Columbia (April 2).

The following week, the Aztecs play at Northwestern (April 10), who were undefeated last year until losing to Syracuse in the final four.

SDSU’s final road trip is to New Jersey where they will play Rutgers (April 16) and Brown (April 18). Rutgers was ranked No. 14 in the final poll of the year in 2021. The Aztecs’ Julia Lytle appeared in 41 games for the Scarlet Knights before coming to SDSU as a grad transfer this year.

The Aztecs close out the regular season with their second meeting with UC Davis April 24 for their senior day.

“This was by far the best fall we’ve had as a program,” White said. “The team was excited for a sense of normalcy and took advantage of every opportunity they had on the field. They bought in, learned from each other and bonded over making the Aztecs a nationally recognized program known for our commitment, closeness and grit. We’ve brought in a lot of talent from transfers to freshmen and we look forward to testing our growth as a program this season.”

All times listed are local to site