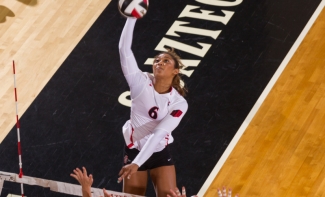 Aztecs to face Nevada at home on Saturday

The defeat was a bitter pill to swallow for SDSU, which led 12-8 in the fifth set, only to see the Spartans close with a 9-3 run to escape with the victory and spoil the Scarlet and Black’s Mountain West home opener.

With the setback, the Aztecs lost their third straight, dropping to 6-10 on the year and 0-3 in conference action, while SJSU moves to 10-4 overall and 2-1 in the MW.

The Aztec cause was also advanced by Baylee Little, who hit .438 (9-2-16) for the evening and totaled six blocks, including one solo stuff, while Alexis Cage displayed her versatility with seven kills, 12 digs and three blocks.

However, the Aztecs were unable to finish off the Spartans after taking a 2-1 lead in sets.

SDSU twice led by four points late in the third stanza, including a 23-19 spread following a kill by Cage, before the SJSU rallied with five straight points, punctuated by Giulia Gavio and Laura Parts’ combined block to nudge in front 24-23. Stung, the Aztecs stood their ground on three Spartan set points, closing with a 4-1 spurt capped by a Turnlund kill and Little’s aforementioned solo block.

Whatever momentum the host school had soon evaporated, however, as SJSU raced to a commanding 16-5 lead in the fourth frame. SDSU trimmed the deficit in half with five consecutive points, but quickly shot itself in the foot with a service error and never threatened again. The Spartans out-hit the Aztecs for the set .333-.032 and maintained a 5.0-2.0 advantage in team blocks to level the score at 2-2.

In the decisive fifth frame, SDSU trailed 7-5, before Harris collected three straight kills to spark a 7-1 run, which gave the host school a seemingly safe 12-8 advantage.

However, SJSU fought itself off the ropes, receiving kills from Parts, Latahevai Lousi and Thaliana Grajeda, who also combined with Nandyala Gama on a block, which narrowed the gap to 13-12.

Despite the uprising, the Aztecs put themselves in position for victory as Dunbar found the floor with a thunderous swing. But the Spartans broke SDSU’s hearts with another stunning outburst, capitalizing on an errant attack and a wayward serve, while Arianna Newcomb added an ace sandwiched between kills by Grajeda and Gama.

SJSU was paced by Gavio’s match-high 19 kills, while Lousi (11), Grajeda (10) and Gama (10) finished with double-digit put-aways for the visitors. In addition, Grajeda and Gama totaled six blocks each, while Luiza Andrade contributed 20 digs.

The Aztecs got off to a fast start in the opening set, building a pair of 11-point leads, including a 16-5 margin, following a kill by Little. SDSU took advantage of 10 attack errors, as the Spartans hit a paltry minus-.062 for the frame.

The two sides combined for 13 ties and nine lead changes in a hotly contested second set. The Aztecs nudged out in front 18-16 after a Turnlund kill. However, SJSU answered with five straight points to reclaim the lead for good.

San Diego State will have little time to dwell on its defeat as Nevada invades Aztec Court on Saturday, Sept. 30, for another Mountain West clash, beginning at 1 p.m. PT.