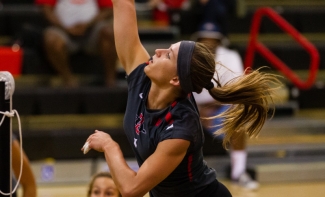 Aztecs wrap up weekend tourney with home matches vs. LBSU, Pacific on Saturday

September 8, 2017 (San Diego) - The San Diego State volleyball team dropped its second in a row on Friday, suffering a three-set defeat at the hands of visiting Loyola Marymount (19-25, 23-25, 22-25) in the opener of the JLABS Challenge at Aztec Court.  With the setback SDSU slips to 2-5 on the year, while the Lions move to 5-3 overall.

Alexandra Psoma led the Aztecs with a match-high 15 kills, while Deja Harris launched a season-high 12 put-aways of her own, hitting .364 to go three blocks. Indigo Thompson also aided the SDSU cause with 37 assists, while Alexis Cage and Devin Pritchard finished with nine digs apiece.

However, LMU outhit the Scarlet and Black .288-.223 on the evening while maintaining the upper hand in total blocks (10.0-6.0) and digs (40-36). In addition, the Aztecs repeatedly shot themselves in the foot, as evidenced by nine service errors, including six in the first set alone.

As a result, SDSU found itself in pursuit mode throughout the opening frame despite blasting 16 kills, including five apiece by Psoma and Harris. The Aztecs twice trailed by seven, including a 15-8 spread following a kill by the Lions’ Sara Kovac.  Later, a Psoma blast found daylight on the opposite floor, cutting the margin to 22-18, but the host school could draw no closer.

The remainder of the match was a much tighter battle, with the two sides combining for 16 ties and eight lead changes over the final two sets.

Past the midway point of the second stanza, SDSU fell behind 18-13, as a Kristen Castellanos service ace prompted an Aztec timeout.  The home squad responded with aplomb, uncorking an 8-2 run capped by an Ashlynn Dunbar kill to forge a slim 21-20 lead. However, two put-aways and a combined block by the Lions’ Megan Rice during a 5-2 closing spurt spelled doom for SDSU.

Undaunted, the Aztecs seemed poised to extend the match after grabbing a 15-11 lead in the third set following an LMU ball-handling error. However, the Lions would not go quietly, as Emma Johnson knocked down two kills and added a block assist during a 9-3 surge that put the visitors in front 20-18.

A 3-1 SDSU run punctuated by a Psoma kill tied the score at 21-21, but LMU ultimately prevailed thanks to put-aways by Savannah Slattery, Rice and Kovac down the stretch.

San Diego State closes out the JLABS Challenge on Saturday when it squares off against Long Beach State (11 a.m.) and Pacific (7 p.m.) at Aztec Court.