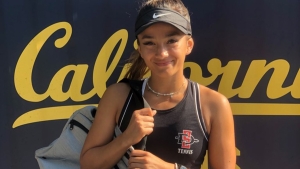 The day was highlighted by senior Tamara Arnold’s second-place finish in the Blue Draw singles finals. Arnold earned a spot in the finals after earning a win in the semifinals over Huang (Utah) 6-0, 6-2. In the finals, Arnold met newcomer Alsola (No. 7 in ITA Newcomers’ Rankings), falling 6-2, 6-0.

Nnena Nadozie captured the second Aztecs’ win of the day with a 6-2, 2-6, 10-4 (10-point tiebreaker) win over Marta of Santa Barbara in the open singles matches draw.

The Aztecs are back in action Oct. 1-3, hosting the San Diego State Fall Classic I at the Aztec Tennis Center.