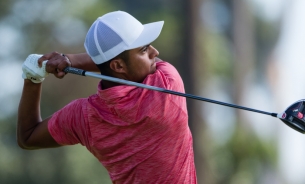 Samiere currently leads the Aztecs with a 72.06 scoring average through 11 events, which ranks ninth in the Mountain West. The SDSU junior also tops the squad with 18 rounds at or below par, including six in the 60s. Last fall, Samiere posted a pair of runner-up placements at the William H. Tucker Intercollegiate and the Saint Mary’s Invitational, leading the Scarlet and Black to a pair of team titles. Additionally, he tied for the Aztecs’ fourth-lowest 18-hole score all-time after shooting a collegiate-best 64 in the opening round of the Alister MacKenzie Invitational in October.

Samiere was also the team’s No. 1 finisher at the elite Southern Highlands Collegiate last month after finishing 17th in a field that featured 10 schools ranked in the top 25 nationally. He is coming off a 14th-place performance at the MW Championship last week for his sixth top-20 showing of the year.

Meanwhile, Mendoza has maintained a 72.19 stroke average so far this season, posting four top-10 performances, including two in the top five. The Aztec senior landed in the fourth spot at the Alister MacKenzie after shooting a career-best 13-under 200, which is tied for the sixth-lowest 54-hole score in program history. He also tied for third in The Prestige at PGA WEST in February, highlighted by a spring-best 68 in the second round. For the season, Mendoza has completed 17 rounds at or below par, including six in the 60s.

Along with Samiere and Mendoza, Abercrombie is the only other golfer to compete in all 11 events for SDSU this year. The Aztec junior became a solid contributor in his first season as a full-time starter, recording a 72.42 scoring average, which ranks third on the squad. He has also tallied 14 rounds at or below par, including in the 60s. Last month, Abercrombie matched his career-high finish at SDSU’s own Lamkin San Diego Classic, where he tied for second on the leaderboard to earn MW Golfer of the Week honors. In addition, the Rocklin, Calif., native tied for third at the William H. Tucker Intercollegiate last September, helping the Scarlet and Black capture the team crown.

Coming off a fourth-place finish at the MW Championship, No. 37 San Diego State is expected to make its school-record 19th consecutive postseason appearance next month after NCAA regional bids are announced on Thursday, May 4, starting at 9 a.m. PT on the Golf Channel.

Golfer of the Year

Freshman of the Year

Coach of the Year