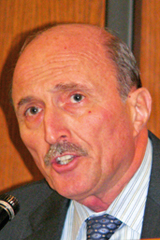 February 16, 2009 (El Cajon)-- Grossmont Union High School
District (GUHSD) trustees voted unanimously to send a cure and correct letter
to Helix Charter High School administrators, asking for documentation thus
far withheld regarding handling of four cases of sexual abuse and misconduct. "To
have a cluster of four incidents in such a short period of time is a red flag,"
said Superintendent Robert Collins (photo, left), adding that the district
has a duty to restore confidence and protect safety of students. "We
are here to solve a problem, not to win out in the court of public opinion."

Helix High principal Doug Smith, parents and students defended school administrators'
actions. (See video
of Smith testimony) Supporters
of Helix accused a private investigator hired by the District's law firm of
biased reporting and suggested the board might have an ulterior motive, seeking
to revoke the Helix Charter. Investigator Robert Price testified in defense
of his report and credentials (see video
of Price testimony). Following
the hearing, Smith told East County Magazine he "absolutely" would
turn over records if requested by the Board in a letter and said a "neutral
third party" such as the District Attorney should be brought in to resolve
the issues. 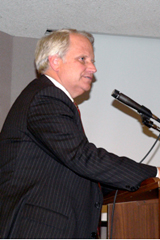 Collins faulted Helix supporters for "attacking the investigator and ignoring
the report." Helix, in a written response to Price's report, had claimed
he lacked experience investigating sexual misconduct cases. But evidence presented
at the hearing revealed that Price (photo, right) received training in sex
crimes investigation through the Federal Bureau of Investigation (FBI) and
conducted investigation into allegations of sexual misconduct at West Point
Military Academy in cases prosecuted by Rudolph Giuliani. He also worked
for the San Diego Catholic Diocese investigating allegations of sexual abuse
by priests.

Collins and other board members emphasized that the GUHSD board has voted
unanimously to extend the Helix charter. "This meeting has nothing to do with
revocation of the charter," he said, praising the Helix academic programs. "It's
about how we address our errors." He likened the scenario to the
era following two mass school shootings in the Grossmont District, when board
members sought to "restore confidence in our schools."

Trustee Dick Hoy, a Helix graduate whose two children also attended Helix, said
he does not blame the faculty or administrators for actions of the four teachers,
all of whom have been held legally accountable for their actions. But
Hoy said he was troubled by a "lack of accuracy and candor" and by conflicting
statements in the District investigator's report and the Helix response. (See ECM's previous article on the two reports)
Some discrepancies could be resolved once documents are produced, he noted. But
other concerns remain.

"An abuser was confronted prior to reports being filed," Hoy said. "Does
that not place the child at risk?"

Trustee member Robert Shield said the issue boils down to trust. "I need
facts. I need evidence. I don't need pressure," he said. "I desperately
want to encourage Helix to be forthcoming with facts about how these were handled."

Several speakers criticized trustees Jim Kelly (photo, left) and Gary Woods
for holding a press conference before the November election in which he alleged
that additional cases of sexual abuse of students had been covered up--allegations
which La Mesa Police disputed and which the District's investigation found
no evidence to support. "If anyone needs to be investigated, it is Jim
Kelly and Gary Woods," Helix parent Lauren Gilliham testified, drawing applause
from the crowd.

Trustee Priscilla Schreiber acknowledged that when Helix officials had been
"attacked by two board members sitting here; it is very difficult to have trust." She
called for formation of a commission including members of the GUHSD board and
the Helix Charter Board to resolve the issues, noting that a similar commission
was convened following the school shootings at Santana and Granite Hills high
schools. "Let's work together to solve this," she urged.

Schreiber noted that following a meeting with the Superintendent, Helix became
more cooperative in opening files, though some records have still not been
turned over. Smith maintains that no written request for the records
has been received from the district. A district lawyer stated that Helix
also cited privacy concerns in turning over personnel records to an investigator
hired by a law firm, not the GUHSD board.

Collins reiterated that the "spirit of the board" is to bring closure
and said some documents may be available through the District offices.

"Ultimately, we as a board become judges," Hoy concluded. "Most of the
time we can solve problems when we sit down and talk, but there has to be trust
on both sides. We need to make things better for Helix and this district, so
we don't need to go through this again."