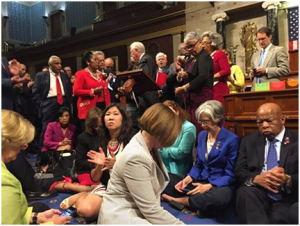 The Democrats’ actions came after the Orlando mass shooting killed 50 people.  Mass shootings have soared since the Bush administration lifted a previous ban on assault weapons.

Republicans have refused to allow any restrictions since then, even to bar people on the terrorist watch list from buying assault weapons, claiming the 2nd Amendment should allow no limits on gun ownership. Many have also taken substantial donations from the National Rifle Association.

Speaker Ryan, calling the sit-in a “publicity stunt,” adjourned the House shortly after 3 a.m. without allowing a vote on the gun control measure.