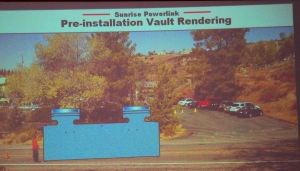 February 18, 2016 (Alpine) –  Alpine planners, school officials, and SDG&E have weighed in with responses to publication of meter readings that revealed high electric-magnetic frequency (EMF) levels along Alpine Boulevard, where Sunrise Powerlink high voltage lines are buried. The readings were first published in the Alpine Sun and later highlights, analysis and community reactions were published in East County Magazine and the Alpine Community Network.

The study that raised concerns was conducted by engineer Robie Faulkner and contractor Michael Milligan.  They found EMF levels were higher at all areas measured than before the Powerlink was built. Of particular concern were findings of EMFs measuring .43 microtessla in front of Alpine Elementary School and 2.04 microtessla at the site of the proposed Alpine High School.  Some studies have found increased leukemia rates in children regularly exposed to levels of .4 microtessla or higher, though other studies were inconclusive.  Study authors Faulkner and Milligan have suggested in a recent letter that Alpine’s children be tested annually for leukemia – a suggestion that has sparked community-wide concerns.

Alpine Union  School District Superintendent Bruce Cochrane, in a letter to parents dated today, reports that at the District’s request, the San Diego County Board of Education sent an expert out to take measurements in and near the school.  “The results, which were made available to us today, show levels well below those reported in the media and within the Environmental Protection Agency-recommended limit of 2.5 milliGauss (mG).” (Note; 2.5 milliGauss is equivalent to .25 microtessla.)

Update: Cochrane has since issued a correction on that statement after East County Magazine advised him that the EPA EPA website states that there is currently no federal standard. He now states, "Hours have been spent diving into all the particulars of international scientific guidance around these guidelines. After reviewing all that can be found, I think it may have been better stated that the generally accepted guidance is 2.5 milliGauss (mG). This is another reason why we are working with the San Diego County Office of Education to bring out an actual expert in this field. Our hope is to have this person assess AES on Tuesday, because we want to make sure we are doing right by our students.” (Read the latest details:  http://www.eastcountymagazine.org/alpine-education-foundation-agrees-fun...)

Also, the test results now available for the Alpine Elementary School confirm 16 of 18 locations are below the .25 microtessla level, however two spots are over that: a bridge over the parking lot is substantially over and a landing between upper and lower parking lots is slightly over. View all test results:  http://www.alpinecommunitynetwork.com/wp-content/uploads/EMF-Report-cond... ]

The district and the County Board of Education are hiring an independent analyst to survey the rates “to help provide our community assurance in the face of the conflicting reports about EMF levels,” said Cochrane. The Superintendent added that according to the National Institute of Health (NIH), these is a “weak” association between measured fields and childhood leukemia, those it is not clea whether it represents a cause-and-effect relationship.

Alpine Community Planning Group board member George Barnett, in an e-mail published by the Ranter’s Roost forum online, noted that concerns over EMFs were raised during the project’s Environmental Impact Report but were “dismissed by the CPUC.”  To address lingering concerns, “the Alpine Community Planning Group reviewed the matter again last month and requested the County Health people to quickly follow up. It also asked the County to intervene with CPUC and SDG&E.”

Update:  Barnett has since clarified that the APCG took no formal action because rules prohibit action on non-agendized items despite urgency. Instead, individual board members took action including contacting the county and school district, as well as the Alpine Educatoin Foundation which has agreed to fund an independent study of EMF levels along Alpine Boulevard. Read details here: http://www.eastcountymagazine.org/alpine-education-foundation-agrees-fun...

Barnett praised Supervisor Dianne Jacob, who has written a letter to the California Public Utilities Commission calling for a state investigation into the EMF levels in Alpine.

SDG&E issued a statement from public affairs manager Don Parent indicating the company is committed to providing “safe, reliable and environmentally sound gas and electric service” while relying on internationally recognized scientific groups such as the World Health Organization and independent regulatory advisory groups that have conducted scientific reviews and health research literature to guide the company regarding EMFs.

The utility company maintains that “science has been unable to determine whether there are health effects from EMF exposure” but says it recognizes the concerns of customers and is taking “proactive measures to lower EMF levels and provide free EMF services and information for our customers.”

SDG&E observes that it is “unclear whether SDG&E’s underground transmission line is the only source of these readings” since EMFs can be emitted by household items at levels higher than the values cited.. For instance, “A microwave oven—even from 12 inches away—could create a magnetic field from 40 to 80 milligauss (4 to 8 microtessla) and a hairdryer from 1 to 70 milligauss (0.1 to 7 microtesla). “ Electrical wiring or even plumbing may be sources of EMFs.

It’s important to note that magnetic fields weaken the farther that one moves away from the source.  So high levels at the street don’t necessarily mean a high risk inside nearby buildings.  The Alpine Sun editor has told ECM that measurements inside her office, located along Alpine Blvd., were low and within levels believed safe.

According to the National Institute of Environmental Health Sciences, a 230 kilovolt power line might be measured at 57.6 milligauss immediately beneath an overhead line, but just 7.1 milligauss at a distance of 100 feet and 1.8 milligauss at 200 feet away.

Sunrise Powerlink is a 500 kilowatt line.  An article published in the British Columbia Medical Journal in 2008 for the BC Centre for Disease Control in Canada states that “It has been found that exposure greater than the range of 0.3 to 0.4 microtessla lead to a double risk of leukemia, with very little risk below this level. This exposure range is approximately equal to a distance of 60 meters within a high-voltage power line of 500 kV.”  However, underground power lines tend to spike higher directly above the buried line, but drop off more quickly in EMF levels as the distance from the line increases.  Sunrise Powerlink is buried in Alpine, but above ground for most of the rest of the route.

SDG&E cites the World Health Organization, National Academy of Sciences, Natoinal Radiological Protection Board in England, California Department of Health Services (now California Department of Public Health) and the International Commission on Non-Ionizing Radiation Protection as among entities that have done major reviews and report that the data “does not demonstration that exposure to power-frequency magnetic fields causes cancer or other health risks, although the possibility cannot be dismissed.” More research is recommended and ongoing worldwide.  There is no health-based state or federal government standard for long-term EMF exposure.

ECM took a look at some of the studies. In the 1990s, most EMF studies focused on very low frequency exposures; some found a “weak” association between EMF field strength and increased risk for childhood cancer, according to the National Institute of Health, which said no evidence of such a link has been found for adults in studies thus far. It is unclear whether all studies accounted for other variables or not.  It is also unclear who paid for the studies, or whether any question of impartiality could arise given that utilities including SDG&E have funded some EMF research.

Here is a summary of some of the studies that did find links or potential links between EMFs and childhood cancers:

A study in 1979 found some children living near power lines had double the risk of leukemia when exposed to .4 microtesslas or more, with some elevated risk at lower levels.  Later studies had mixed results, with some finding no link but others showing a risk, according to Cancer.gov.  A pooled analysis published in the British Journal of Cancer in 2000 found a two-fold increase in leukemia risk in children with the highest exposure (over .4 microtessla), while another analysis combining data from 15 studies found a similar increase in risk in children with the highest exposure level, Epidemiology reported in 2000.

The British Medical Journal in 2005 reported a study in which nearly 30,000 pairs of children in the United Kingdom which could children in homes up to 600 meters from powerlines had an elevated risk of leukemia.  An increased risk of 69% for leukemia was found for children living with 200 meters of power lines, while an increased risk of 23% was found for children living within 200 to 600 meters of the lines.  The British Columbia Medical Journal in Canada, in a 2008 article, also cited a possible “moderate risk”  of brain cancer that “cannot be excluded” at 0.3 or 0.4 microteslla. But the World Health Organization has listed EMFs as merely a "possible" carcinogen.

So what does all of this mean?

If you’re an Alpine resident, it doesn’t mean your town is  unsafe or that it’s time to pack up and move.  If you live or work very close to the buried power line and have concerns, you can ask to have measurements taken at your home or business. This is probably a wise idea for pregnant women and families with young children, though the likelihood is that most levels will fall within the EPA threshold of what is considered safe.

You may want to avoid repeated strolls directly atop the buried powerline.  You can also reduce your EMF exposure to other sources, which can include everything from cell phones to GPS devices to microwave ovens.

ECM has asked SDG&E what actions it would consider taking if levels are found above the EPA thresholds in areas where Alpine residents live, work and go to school.  We’ve also inquired what shielding methods were used on the Powerlink beneath Alpine Blvd. and whether additional protections should be considered. We will report back when we receive responses to these and other questions.