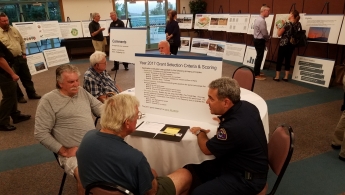 September 24, 2017 (Alpine) -- Nearly 60 East County residents attended the first open house held by the Sunrise Powerlink Fire Mitigation Group (SPFMG) at the Alpine Community Center on Sept. 19. The purpose of the open house was to educate residents about the fire mitigation grants program and the results of the 2017 grant program.

The Sunrise Powerlink Fire Mitigation Group (SPFMG) was established to address fire concerns along the path of the high voltage transmission line from the Sunrise Powerlink. The member agencies of the SPFMG, besides SDG&E (which is a non-voting member but funds the agency), are the Bureau of Land Management, Cal Fire, San Diego County Fire Authority, the City of San Diego Fire and Rescue Department, Alpine Fire Protection District, and the Lakeside Fire Protection District. 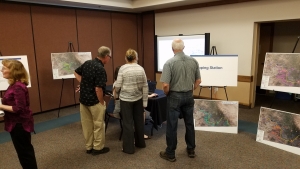 Due to the “low risk/high catastrophic” fire risk posed by the transmission line, the California Public Utilities Commission (CPUC) mandated the formation of the group to develop plans and provide funds to local residents for brush cleaning to maintain defensible spaces, fire hardening of structures and general community protection.

According to Franc Fennessy of KP Environmental, a company that provides environmental logistical support to public and private sector agencies and companies and is a media advisor to SPFMG, the agency was formed in 2008 to administer the $2.6-2.8 million dollars that is paid yearly (and will be paid yearly for the expected fifty-eight-year lifespan of the Powerlink line) by San Diego Gas and Electric to SPFMG.

The grants, up to $2,230.50, applied for by eligible residents care evaluated using a scoring system which takes into account how close a property is to the high voltage line (overhead, underground, and overhead expansion areas), the number of times an owner has applied for a grant (weighted to encourage first time grant awards), and the level of fire threat. “We encourage everyone who is eligible to apply for the grants, but we do give priority to those owners of land parcels who have not received grants in the past,” Fennessy said.

The process of residents applying for grants up to now has gone smoothly, says Fennessy, but in 2016 and 2017, the number of projects requesting funding increased substantially, causing the number of grants to be curtailed. That in turn has caused a number of residents to submit complaints to San Diego County Supervisor Dianne Jacob claiming that the agency lacks transparency in its general operation and how it distributes the funds. (Jacob has been a strong opponent to the Powerlink project since it was proposed by SDG&E.) 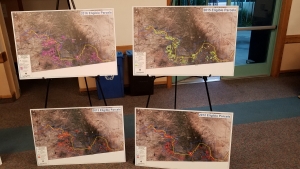 In a letter submitted in late April to the CPUC calling for SPFMG to be audited, Jacob said in part, “While I have been staunchly opposed to the Sunrise Powerlink, residents of my district who reside in close proximity to the Powerlink have for years relied on this grant program to protect their homes from wildfires that could be sparked by this unnecessary transmission line. Residents have expressed concerns that the number of grant awards and the amount awarded has fluctuated with no consistency or rubric for how grant awards are made. This has led to a general sense of frustration over how the program is managed, and that San Diego Gas & Electric has shirked its responsibility.”

But a CPUC staff review in mid-July found that the SPFMG has been implementing the grant program “consistent with the mitigation measures put in place.” It went on to say that it has requested that the SPFMG provide “more detailed information on their website relating to their scoring criteria and on rationale for grant award selection at the end of each funding cycle.” It also said that the grants are, and have been made through an application process to a focused area near the transmission line corridor. “The focused area may change from year to year, based on landscape conditions determined by the SPFMG.

For those residents not able to attend the open house, the main materials consisting of show cards which were displayed at the event are now available to be viewed online at the board’s website, spfgm.com along with other resource materials.

One of those residents named “Diane” (who refused to give her last name to ECM), was one of the individuals who attended the open house who was initially very critical of the SPFMG when she was denied a grant request, but has had a change of heart. But after the event said, “I’m really impressed how the SPFMG is going about telling our community how they go about giving out the grant money.”

Despite the SPFMG’s recent disclosures, which took place because of San Diego County Board of Supervisor Dianne Jacob’s inquiry to the CPUC and resulted in direct recommendations to be made by the SPFMG, longtime Deerhorn Valley resident Kim Hamilton says the agency has still a lot of work to do.

“We appreciate that we are seeing the information that we have asked year-after-year-after-year. We’re still in process and I’m waiting to see what they can do. I did attend the open house, and had a brief five-to-ten minute conversation with the chairperson of the SPFMG, it is clear to me that they are not going to change their minds or approach in any way in our perspective,” said Hamilton, who has been a resident of Deerhorn Valley for 31 years and is also editor of the Deerhorn Valley Antler and Antler Alerts advising residents of fires and other emergencies.

Hamilton’s main concern is that the mitigation funds be given to people in a danger zone with overhead transmission lines. She says that it was very clear in the Environmental Impact Report (EIR) in 2008 the path of the fires which hit East County.

“We were caught flat-footed because half of my community was destroyed in 2007 by the Harris Fire. They quickly changed the route of the Sunrise Powerlink transmission from North County – where they were getting a lot of blowback – to right down here [in Jamul]. We were in the aftermath of the fire dealing with construction and insurance. Suddenly, the Sunrise Powerlink comes through our neck of the woods,” Hamilton said. “If we were downwind from the lines that’s obviously a problem when you fight fires, we would get defensible space mitigation. Originally that might have included Alpine, but Cal Fire came out so strongly saying ‘you just cannot put these overhead lines right alongside I-8’ – they put their lines in Alpine.  They mitigated their danger by putting the lines underground [in Alpine] and then they eliminated them from funding the mitigation grants,” said Hamilton.

In essence, said Hamilton, Jamul residents are complaining that some grants have been provided to Alpine properties which are at a lower risk for fire than Jamul properties that did not receive grants. She also objected to the public meeting being held in Alpine, convenient for Alpine but apparently too far from Jamul for most residents to travel on a weeknight.

“Now what we are seeing are a disproportionate of fire grants and monies going to Alpine. And we have been denied and reduced. I would say, arguably, I don’t know of any other community as densely populated as we are,” she points out. “We are 400 homes in a two mile square mile area. We are directly in the shadow of those Powerlink lines. And to see all of this money going to Alpine – to see Alpine condos and apartments eligible for defensible space grants where they have paved streets and boulevards is just unconscionable.”

Complaints have also arisen that no Jamul resident is a member of the mitigation group and that their representation is limited to the County Fire Chief, while Alpine has a dedicated representative. Fennessy said that the grant program will always apply fire severity as a critical criterion for grant awards, but will also apply other criteria it deems necessary to ensure that program objectives are met.

As for accusations that the community of Jamul is under-represented on the board, Fennessy said that in addition to being represented by the San Diego Fire Authority, Jamul is also represented by Cal Fire and the Bureau of Land Management, as are surrounding communities. Fennessy concludes, “The central role of the Sunrise Powerlink Fire Mitigation Board is to act collectively to reduce fire risks and look at fire safety across the entire area including Jamul, Alpine and other area communities.”