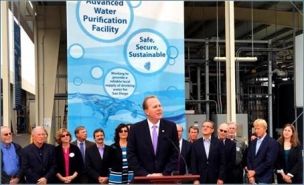 Photo, city of San Diego: Acceleration of the time schedule for the Pure Water purification in San Diego is putting pressure on agencies across the region to raise sewer rates.

April 5, 2017 (San Diego) - Acceleration of the Pure Water project in the city of San Diego is leading to proposed sewer rate hikes in East County of as much as 9 percent per year for the next five years for some customers, depending on wastewater use. Some may start at low as 2.5 percent. Though agencies are still crunching numbers and calculating percentages, several report that both residential and business rates are due to go up on July 1. The increases are mostly due to the purification project going into its construction phase sooner than anticipated, according to local agencies. 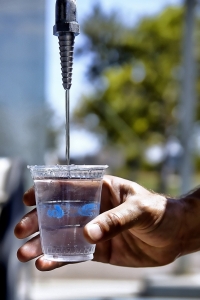 Pure Water technology treats toilet water and other household wastewater to drinking standards via filtration, ozonation, reverse osmosis, activated carbon and UV/advanced oxidation. The concept is in the demonstration stage in San Diego as a way to offload some of the emissions discharged to the ocean from the Point Loma Wastewater Treatment Plant, to avoid taking the plant to costly secondary treatment. Point Loma is the last ocean outfall plant in the United States not operating under the secondary standard required under the Clean Water Act. Instead, it operates under a waiver. The city’s goal is to use Pure Water to provide one third of its drinking water by 2035. The project’s completion cost has been estimated at $3 billion. Similar technology is already used in Orange County.

The issue of who will get to drink the water in San Diego, versus who pays for the system, is a growing source of contention, even among supporters of the concept. In fact, the word “sue" has entered the conversation.

The Point Loma plant is part of the Metro Wastewater System, which treats sewage from agencies throughout East and South County, as well as the city of San Diego. Under the Clean Water Act, each agency is mandated to pay its share of treatment costs. The city of San Diego, other agencies and environmental groups were in general cooperation about Pure Water until October 2016, when San Diego voted to ramp up plans and go straight to generating 30 million gallons a day (MGD) of drinkable water via the system -- double the 15 MGD originally planned for the initial phase. According to city of San Diego staff, successful water conservation reduced the amount of wastewater going into parts of its treatment system, so now, more is needed to be sent to the North City plant to produce the 15 MGD. The city has decided it may as well increase the flow to the later project goal of 30 MGD. More drinking water production in San Diego has its benefits, according to Pure Water spokesperson, Alma Rife. “We did this because of the drought,” she says. 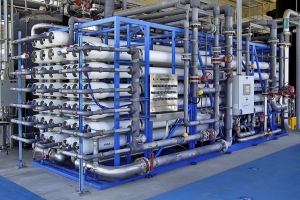 The problem for outlying participating agencies (PAs) however, is that infrastructure to support production of 15 MGD was already in place, so there would have been only negligible costs to their residents, says Jerry Jones, Lemon Grove city councilman and chairman of the Metro Wastewater Joint Powers Authority (JPA), which represents those agencies. However, 30 MGD means kicking off the construction phase sooner than expected. Smaller districts will have to pay their share of that earlier than anticipated, without sharing in the benefits of drinking the water, he says. The latest of five Pure Water contracts was issued in October.

“This began as a wastewater issue,” says Jones. “If it’s now a water issue, the other ratepayers shouldn’t have to pay, when they won’t get to drink the water.”

County Supervisor Dianne Jacob told East County Magazine this week, “It is wrong to ask ratepayers to help speed up a project in the city of San Diego when it’s not clear Pure (Water) San Diego will ultimately benefit ratepayers in my district.”

Pure Water plans are based on an agreement with the USEPA and Regional Water Quality Control Board (RWQCB) that allows the city of San Diego to have a waiver in lieu of secondary treatment for the Point Loma plant. The waiver is part of the National Pollutant Discharge Elimination System (NPDES) permit, which has to be reviewed before renewal every five years. Jones is concerned that the renewal isn’t a given. He maintains that the worst-case scenario is if all agencies responsible for treatment costs are asked to pay for Pure Water, only to find that in the future the waiver isn’t renewed and secondary treatment is mandated anyway.

In a letter to the USEPA and RWQCB in February, Jones wrote that the Lemon Grove Sanitation District learned on Feb. 10 of proposed changes to the five-year (NPDES) Permit for the Point Loma plant. He requested a continuance of a joint meeting between the EPA and RWQCB on April 12, so wastewater participating agencies would have more time to analyze how they could come up with an equitable revenue sharing plan. However, the meeting is still scheduled for April 12. Supervisor Jacob plans to testify at the meeting.

In his letter, Jones wrote that his constituents have “no commitment to a revenue sharing benefit that may come from Pure Water,” though he emphasizes his district’s continued support for the original plan and benefits of the project. He also states that “the political realities of continued waivers are not a certainty and the costs of secondary upgrades in addition to Pure Water will remain a possibility.”

Regarding the ramped up Pure Water schedule, Gregory Humora, La Mesa assistant city manager, says, “We all knew the costs were coming. We just didn’t expect them so soon. Our increase is due to the capital construction components. We’re all in the same boat. We’re trying to process the changes that San Diego has proposed.”

In El Cajon, a current rate study is likely to bring about increases later in the summer. “We know that with increasing costs, we’ll have to do something,” says Dennis Davies, the deputy director of Public Works. “We’re waiting for more detailed information from the city of San Diego. As the (Pure Water) project gets further along in the design phase, the actual costs become more clear.” Davies says they’re also waiting to see if the RWQCB renews the waiver for the Point Loma plant. “The possibility of having to do secondary treatment is still a definite concern. All agencies are very concerned. After all, that’s still what the law requires.”

The unexpected Pure Water construction-related costs amount to approximately $103.6 million, which has to be shared among the 12 member agencies of the JPA over the next four fiscal years, Jones says. Five agencies that serve East County currently plan to pass through at least a portion of those costs to ratepayers for several years:  County Sanitation District, the cities of El Cajon and La Mesa, Lemon Grove Sanitation District and Padre Dam Municipal Water District.

Public hearings on the proposed increases will be held from April 12 through summer. Some agencies already have mailed notifications to property owners, under Prop. 218. Ratepayers can protest in writing up until the day of each hearing. The increases can only be blocked if 51 percent or more of property owners hand in protest letters before the end of the public meetings.

In an interview for this article, Jones said the participating agencies of the JPA are overwhelmingly opposed to the acceleration. In at least one news report, he has alluded to a possibility that the city of San Diego has opened itself to potential legal action. At its March 2 meeting, the JPA went into closed session due to “possible litigation”; however, Jones has declined to state the reason on the record or who that litigation might involve.

This serves East County’s unincorporated areas of Alpine, Campo, East Otay Mesa, Lakeside, Spring Valley and Winter Gardens. Proposed rate increases range from 2.5 percent to 9 percent FY 2017-2018, depending on use. Average single family homes and all businesses would see a 9 percent increase for the subsequent four fiscal years. The County is also considering a pass-through ordinance, to increase sewer service charges by the amount of future cost increases imposed by the city of San Diego for operation of the Metro system. The public hearing for both is 9 a.m. April 12 in the Board of Supervisors North Chamber, Room 310, County Administration Building, 1600 Pacific Highway, San Diego.

A rate study is underway. Before setting rates, the city is waiting to hear whether the RWQCB will renew the waiver for the Point Loma plant at the April 12th meeting, according to Deputy Director of Public Works, Dennis Davies. City of La Mesa

An average single family home would see an increase of 4.7 percent in FY2017-2018 and 4.8 percent for FY2018-2019. Business increases hadn’t been calculated to percentages at the time of this article. They will be assigned based on business classification. Public hearing: 6 p.m. May 9 in city hall chambers, 8130 Allison Ave., La Mesa. Written protests can be delivered to the city clerk’s office by noon that day or handed in at the meeting, before its end.

Sewer rates are currently being studied by a consultant. Expect proposed increases based on pass-through costs from the Metro system. No details are yet available. However, according to Padre’s chief financial officer, the Metro system is passing along a cost of $867,000 more to them for FY2017-2018.  They plan to have a public hearing in June 2017 at their offices, 9300 Fanita Pkwy, Santee. Notifications will be mailed out.

A public hearing about the city of San Diego’s NPDES permit is scheduled for 9 a.m. on April 12 at the RWQCB meeting room, 2375 Northside Drive, Suite 100, San Diego.

Pure Water is derived from all used water in a household (sink, tub, washing machine, etc.) not just your toilet. Get your facts straight.