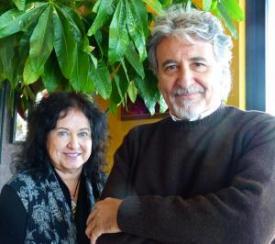 April 13, 2014 (Escondido) – On May 1st, a new  bilingual newspaper will launch.  The "Escondido Alliance/Alianza Escondido" aims to fill the news void left by closure of the North County Times, which folded after U-T San Diego publisher Doug Manchester purchased the publication.  The former Escondido Times-Advocate had previously been absorbed by the North County Times, so the series of acquisitions has left Escondido without a local press to cover politics, events and more –until now.

“People are so excited when we tell them we’re starting a newspaper,” said Nina Deerfield, co-publisher of the Alliance along with Marco Lopez.  “They’ve had no voice…There is so little coverage of what’s happening in Escondido.”

Lopez is an attorney and former general counsel for Cesar Chavez during the heyday of the farm workers labor movement.  “I marched with Cesar Chavez in Salinas,” he recalled.  He believes Latino residents have been the target of discriminatory laws passed by the Escondido City Council.

These include an ordinance prohibiting landlords from renting to undocumented immigrants; a court later struck down the law.  The Council also enacted a measure restricting the number of vehicles that could be parked outside rental housing, an action Lopez says was directed at Latinos. Then the  Council majority, with the exception of Olga Diaz, voted to shut down a city library and community center in the city’s eastern area that serves many Latinos and tried to dramatically raise the cost of community recreation classes.

Lopez grew up in border communities in Arizona and Texas.  “I used to be like the Paul Revere of the barrio,” he quips. “When La Migra (immigration officials) would come, I’d get on my  bike and, at the top of my voice, warn everybody.”

Later in life, his legal career included a successful lawsuit filed against the Border Patrol for shooting a 12-year-old across the border.  “It was the first time the Border Patrol had been beaten in civil litigation for excessive use of force,” he said, adding that a “Deep Throat” tipster informed him that the agent who shot the child had made a statement before a New York official, directly contradicting the government's official version.

Lopez and Deerfield met at a coffeehouse meeting, where he had come to speak out on homeless issues and she was speaking on concerns about religious and political influences in a publicly funded charter school.   “I felt I already knew him,” said Deerfield, who has a long history of activism.

Raised by progressive-minded parents, she joined her first civil rights march at 13, was very active in anti Vietnam war protests, and burned her bra at the beginning of the women's liberation movement.

While in New York her career included running the United Nations Montessori school.  She then moved to London, where she met a colorful collection of acquaintances ranging from radical filmmakers to rock star David Bowie, whom she dated briefly.  She worked in the film industry for a time and then met the owner of the Embassy Club—a famous nightclub she quickly wound up running. “ It was an outrageous time,” she recalled.

She moved to California to care for an ailing relative in Ranchita, then later moved to Escondido.

Still an activist at heart, Deerfield led efforts to force growers and certifying agencies to stop labeling bananas "organic" that were not organic.  “The companies would send checks and get certified; nobody was checking the fruit,” she explained.

She later spoke up after seeing a mascot at her daughter’s publicly funded charter school wearing a political T-shirt that read “Friends don’t let friends vote Democratic”.  She called the ACLU after hearing  overtly Christian prayers at a graduation ceremony at this charter school that she believes violate the constitutional requirement for separation of church and state.

Lopez says Escondido has had a virtual “news blackout” on many issues of importance to residents, such as motivations behind turning much of a community center over to a private owner.

“These guys are doing what they want,” he said of the Council majority.

The newspaper will be available both  in print and online as a monthly edition, starting with 10,000 issues. After six months or so, the publishers hope to expand to weekly or biweekly editions.

“Our goal is to get people to understand why they should vote—and why the way they vote matters,” Deerfield concluded.